Beth and Taylor, along with Taylor's friend, Elizabeth, joined us for a long weekend.


Their first night aboard, we planned a steamed crab feast. Cameron had caught about 10, and a neighboring boat offered a half dozen they were not going to eat. The sun was setting, the heat subsiding. Then a spectacular thunderstorm swept through. We savored the cool breeze and thanked the god of storms for pushing the worst of it to our north. Then we settled into the cockpit for a late dinner, cracking crabs with too little light [I am not sure why that issue had not arisen earlier]. 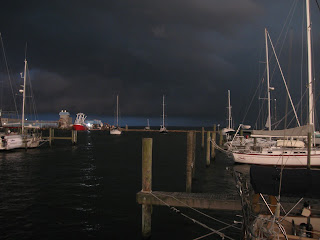 Friday was a light work day preparing the boat for sail.

Saturday, we backed out of our slip and slowly motored out to Channel Marker 1. Despite the light winds, we set the genoa and caught the breeze blowing over our stern. As soon as the sail was filled, I slipped the transmission into neutral and paused before the magical moment all sailors revere. Cameron turned off the engine. We were enveloped in the quiet of calm air, a soft rush of water along the hull and the rustle of the sail. After almost a year, Wild Haggis sailed again. 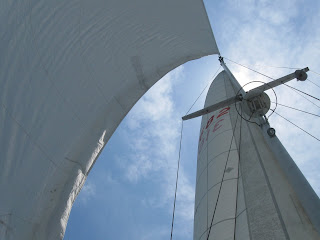 For several hours, we coasted down the Neuse River. A gentle breeze and clear skies. It was Elizabeth's first time on a sailboat. It was Taylor's first time on a sailboat that was not flying 8+ knots in 15-20 knots of wind. We all relaxed, tried to find shade, ate lunch and drank lots of water. Scout hung out on the floor of the cockpit in his boat boots, hot and panting but happy to be along for the sail. 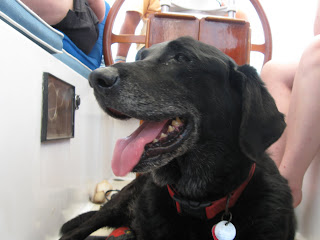 Early afternoon, we made the turn into Pamlico Sound proper and headed southeast for the entrance channel for West Bay on the backside of Cedar Island. Mid-afternoon, out of nowhere, a solid southern breeze piped up, and we were making 5+ knots. Wind in the rigging and water swooshing past the hull. Beth had gone below for a nap. Stretched out on our aft berth, rocked to sleep by the boat's easy motion.

When we reached the entrance channel, the wind was dead on our nose, so we furled sails and cranked the engine. With a four to five mile fetch, the Bay had built some good waves that sent walls of cool spray over the deck. We pushed through to the far southern side where the water was calmer, dropped the anchor and surveyed our anchorage. Peaceful, remote and undeveloped. Marsh and woods. Only one other boat anywhere in sight with over thirty square miles of water. [I am intentionally ignoring the otherworldly military complex on the western shore.]

Taylor has been hoping to jump off the boat for a pleasant swim. We had seen very few jellyfish since leaving Oriental, so we were optimistic. As soon as Cameron and I cleared a chain jam in the windlass, we walked along the side deck scanning the water. There it was, a beautiful and diaphanous jellyfish, a moon jelly (see below). As he was reporting the sight to Taylor, a school of stingrays swam past just below the surface of the water. The girls decided to fish.

All night long we were surrounded by a light show from distant storms, storms so far away we could hear no thunder. It was great to be away from the dock. 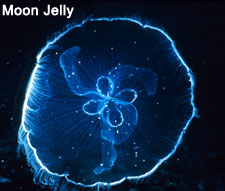