Along with our good friend Dan, Cameron and I piled the kayaks on the car, strapped them down and returned to Phelps Lake for this year's look at the legions of migratory wildfowl. With temps during the day in the low 60s and nights around freezing, the weather could not have been better. Cool enough for a stout campfire.

Unlike last year, our trip began with a successful boarding onto the Aurora to Bayview ferry, one of our local ferries that will become taxed in July if our elected officials fail to reconsider the folly of taxing what are, for those of us who live in Pamlico County, our bridges to the rest of the world where most people make their livings. From the ferry landing on the north shore of Pamlico River, we hurried through the farms and marshy barrens toward Belhaven and the Pungo River. In Belhaven, Dan introduced us to the Belhaven Memorial Museum. He had actually been there before, which puts him in a very exceptional group.


Mrs Way (not Fay Way, but her first name is unimportant) was a collector on the order of Homer and Langley, but in the small town of Belhaven, not New York City. It is all relative. Her gatherings might be called hoarding by some, but would be eclectic to all. Old magazines, newspapers, several typewriters, several cameras, dinnerware, furniture, cooking implements and enough heavy tools to run a small farm. Normal household items. But then there are the button maps, military uniforms foreign and domestic, whale bones and a large ship's anchor. We wandered toward the notably odd for a genteel southern woman. Huge rattlesnake skins frame the case containing jars of specimens in formaldehyde. Glass jars full of small snakes, two fawns and a few premature fetuses not to mention toenails grown wild and two tonsils. Now we had stepped boldly into the weird.

She never received one item on her wish list, an embalmed Japanese soldier. Where did that come from?

Belhaven itself is a quiet town on the Pungo River where the Pungo-Alligator River Canal terminates.

From Belhaven we drove the winding scenic byway of Hwy 264 to Mattamuskeet High School for the Decoy Festival. A micro version of Charleston's Southeast Wildlife Expo, there was enough camoflage along with neon duck calls and decoys old and new to keep us busy for five or ten minutes. Dan and Cameron killed a bunch of ducks on the TV screen, then were outgunned by a nine year old girl who braced the shotgun in her armpit and hit 80% of her ducks.

On the road again, we shot up the middle of Lake Mattamuskeet on Hwy 94 seeing few birds except for a flock of swans at Jean's Landing, a private boat ramp on the side of a side road, the back way to Englehard.

As we hit late afternoon and still had miles to go before we camped, we skipped past the revitalized downtown of Columbia even though they are making a big deal out of wine from Scuppernong grapes grown near the eponymous river (or is it vice versa?). With sunset threatening, we set up tents, fired up the propane for tea and gathered wood for the campfire (bought bundles of it at the out-of-season washhouse). It had been a long day, and I was still trying to get my head around Mrs Way's bizarre collection at the Belhaven Memorial Museum (plus, I am not sure you can memorialize a town that still exists).

There are many conditions that influence the behavior of animals. In the case of this year's 8-10,000 Tundra swans calling Phelps Lake their winter home away from home, the brilliance of a waxing moon coupled with hunters trying to shoot them when they left the refuge to eat had caused them to defer their nightly rendezvous on the lake. The lake was quieter than last year with only the soft, distant chatter of a flock on the far (lee) shore. We all slept well.

It was still blowing hard out of the south when we woke the next morning and began procrastinating about our plans for the day. Let's have another cup of tea. The winds, waves and whitecaps were all too big for us to safely paddle on Phelps, so we defaulted to the lazy brown water of the upper Scuppernong River, the headwaters of which are near Phelps.


It was a languid drift down the nearly currentless river as we floated past marsh woodlands, listened to the chattering of kingfishers and the tapping of Downy woodpeckers. Despite the warm sun, we saw only two turtles basking on tree trunks. Very quiet and peaceful. Although we heard a few far off swans, we saw only one turkey buzzard about which I had heard a birder that morning declare, "Well, that bird in the field was a buzzard, I think, but we'll call it a juvenile Bald Eagle." Yes, much more interesting to see an eagle even if you did not.

A pileated woodpecker danced from one dead tree to another, hammering a bright and varied rhythm to rouse us from our tents. After touring the grounds of Somerset Place, the adjacent plantation, we packed the car. In a land of little population, flat fields stretching miles to a wood line and many winding roads, fifteen miles becomes a half hour of travel, and we had much we wanted to do on our last day. We backtracked to Mattamuskeet to see the old pump house cum defunct lodge and discovered lots of wildlife. Not counting the nutria (a large rat-like varmint so unloved that it has no closed hunting season), we saw swans, mallards, wood ducks, widgeons, scoters and several types of duck I could not identify. Most of these birds were huddling in the flooded grasslands outside the lake and leaped purposefully skyward as we passed.

We capped the day with a late lunch (fresh shrimp and oyster sandwiches on white bread buns with ketchup) at Big Trout Cafe on the water in Englehard, then stopped in Bath before catching the sunset ferry back to our side of the river, the phosphate mine operation looking as dystopian as ever. 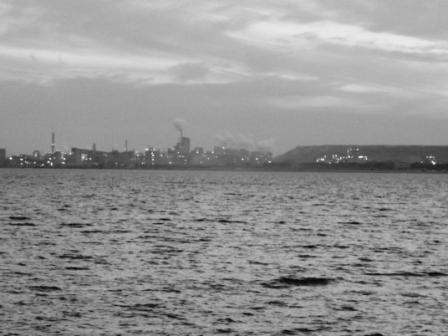 Tomorrow is Burns Night, a worldwide celebration of the Scottish bard. If you can, grab a bite of haggis, the great chieftain of the pudding race, and toast it with a fine single malt, neat.