A month or so ago, I enlisted both myself and Cameron to paddle in the Dragon Boat Race. I had a vague idea of what a dragon boat is, but had never been in one. When I signed up, I did not realize that there is no dragon boat in Oriental. The dragon boats are transient like many of the cruisers.

Dragon boats carry a crew of twenty paddles plus a drummer to keep the cadence and a steersperson to, you know, steer. As if a long narrow boat with low freeboard is not tippy (tender) enough, the drummer sits high on the bow and the steersperson stands on the stern with a sweep oar for a rudder.

After a month of anticipation, Cameron and I went to our first practice on the Thursday night two days before the Saturday race. In the meantime, the team had lost a paddler so Taylor also joined us. Cameron and Taylor are both good paddlers, having grown up paddling  kayaks and whitewater rafts. Our practice was conducted poolside at the "blueberry condos" of Neuse Village. In lieu of dragon boat paddles, many of us brought half kayak paddles. (There are no dragon boat paddles in Oriental either.) Not really ideal for single-paddle strokes. A member of another team taught us the dragon boat stroke, a vertical piston motion unlike canoe or kayak strokes with a firm upper arm (elbow extended) and a short draw from a long reach forward to knee or mid-thigh. An odd stroke for the kids and me.

Other advice was dispensed by veterans of the first Dragon Boat Race last year. The most important, aside from maintaining cadence with the rest of the crew, was to stay hydrated. We were in a heat wave of historical magnitude with heat indices around 110. Michael, also a member of another team, cautioned that we should "start drinking tonight." I went straight back to the boat and opened a beer.

Friday afternoon, the dragon boats arrived. It was like waiting for Santa, tracking their progress and delays as they trekked the barrens and stormy weather of eastern North Carolina in search of Oriental. Our team lifted the boat off the sand of Town Beach and carried it (sliding mostly, to the verbally expressed dismay of one of the organizers, a very unhappy woman) into the choppy waters of the mighty Neuse. The dragon boat was pretty much a filet. No dragon head on the bow. No dragon tail on the stern. Just a bunch of colorful scales down the sides. With 22 people to clamber aboard, the boat naturally lost its bow-into-the-waves orientation and we shipped a bit of water over the gunwale. Our steersman, a pro from out of town (the promoters did not want to risk that one of we rookies would sink the boat or paddle to the wrong side of the river), backed off the beach, our team picture perfect in coordination and synchronicity. But that was backing, a stroke we had not even rehearsed in our practice the night before. Maybe we had native talent?

When we switched to a forward paddle -- "paddles up, take it away" -- we headed toward Whittaker Creek which was calmer water than the windy Neuse. Ahead of us, a team of young Marines seemed out of place and not really moving. Yes, they had sunk their boat and were standing on a shoal. As we chuckled, we shipped more and more water. Our steersman suggested we might want to bail. We asked "with what?". Apparently there should have been a bailing apparatus on board. Determining that there was no bailer aboard and being a responsible pro with 21 souls in his hands, he said we would return to the beach. One member of our team recommended continuing since we were so close to the flat water of Whittaker Creek, but our steersman was in charge and believed it important that we get a bailer.

We shipped more and more water as we ran slightly beam-to across the waves. From being ankle deep, the water in the boat was soon to our calves, and then it was too late. We slowly capsized, rolling to port and spilling paddlers in all directions. Sandals, water bottles and paddles floated freely. We gathered the flotsam and began walking the sunken dragon to Town Beach, a couple hundred yards away.

When we reached the beach, two of the people who brought the dragon boats were so concerned about the boats touching the sand that they began bailing while the boat was still in the water. It was full and too heavy to lift, so they bailed and bailed while the river continued to surge over the gunwale, replacing the bailed water faster than it was removed.The two seemed oblivious to the folly of their efforts and could not see that they would have to lower the level of the entire Neuse River before they began to empty the boat. Sisyphus' fate was no more formidable.

By the way, the "bailers" were laughable. Badly cut from milk jugs, they would hold a pint. Maybe. Milk jugs make good bailers (stiffer jugs are even better); we have one in our dinghy. But these were cut by a person or person who had no idea how a bailer works. Had we known that we were returning to the beach for this joke of a bailer, we would have continued to Whittaker Creek for sure. Still, being soaked felt good, especially since no one was stung by a jellyfish.

Later, we all gathered, dry, at Dan and Sharon Forman's house. Sharon was our captain, and Dan was paddling with us. It was our first real chance to meet other teammates as we drank beer and wine and munched on heavy hors d'oeuvres among the trees growing up through their deck. The most experienced members of our team were four women from Morganton who have their own dragon boat on Lake James, but also paddle with a team from Lake Norman near Charlotte. They are all breast cancer survivors so had a lot in common with Beth. All of the Oriental team members are sailors so much of the conversation included boats and cruising (both past and future).

Saturday. Race Day.
0800
Someone awakened the dragon in a traditional ceremony of painting the eyes, but I did not see it.
0830
Teams lined up for the parade. http://www.youtube.com/watch?v=30xiwC-14eE
Pirates for PAWS (Pamlico Animal Welfare) 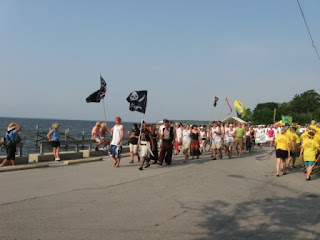 Dragon Riders, a group of local cyclists
Fossil Floaters from Aurora, whose name conjures ...well, you know.
Team Puff, our team. Hopefully not to be confused with Cream Puff. Last year's team song was "Puff my ass is draggin'" to the tune of Puff the Magic Dragon. 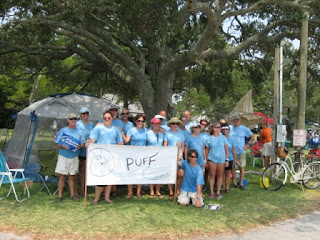 Cameron drew a concept for the team banner. 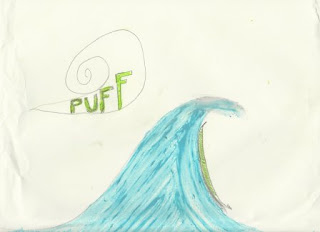 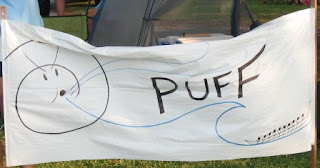 Racing begins.Sixteen teams racing head to head in two boat heats. 250 meters. Just over a minute of hard paddling. Each team was required to have a minimum of eight women of the twenty paddlers. Our team had less than eight guys. The Marine team, The Punishers, were in a category of their own (against another Marine team); they had one woman, their staff sergeant.

So, of course, knowing we would be seriously out-manned by the Marines, guess who we drew for our first heat? Yep, The Punishers. At the start, they leaped ahead. We had a good coordinated start, but they were simply much stronger and pulled away from the first instant. We slipped behind by a boat length and settled into our race cadence, our distance rhythm. The Marines began to lose their rhythm, maybe because they knew they had beat us with their awesome start off the line. We eased steadily forward, catching up with every stroke. We stroked harder, harder, harder: "dig, dig, dig". Almost a stroke per second. Surely the finish line was near. Paddle, paddle paddle. I don't remember breathing. I only remember the uniform rise and fall of arms, the green swirl of water from the paddle ahead of me (Cameron's) and the sway of the boat as we leaned into each stroke and pulled for all we were worth.

The steersman yelled "Let it ride!" Suddenly it was over. Best of all, we had beat The Punishers. [They went on to win the Military Division against the other, all-male Marine team.] You can see our first race in the first minute of this youtube video.
http://www.youtube.com/watch?v=ZhSbvJPExTk&feature=related

It was yet another fun festival in Oriental with the usual aromas of fried anything mixing with the sticky sweet frozen drinks. Spectators lined the river along South Avenue and in boats along the race course. Team tents were erected on the shady lawns of the waterfront, generous homeowners encouraging us the take a short cut across their lawn to Town Beach where we launched the boats for the races. Yes, it was another of many recent hot days, but a fresh breeze off the river made it pleasant enough. The oldest race participant was Fran Deaton, 85. The youngest was Cameron, 15, the minimum age to race.

My parents joined us, bringing lunch. My mother's fried chicken, devilled eggs, potato salad, cheese biscuits and iced tea. Dessert was the tasty chocolate and pecan morsels (not really cookies) that we call "fudgies", a recipe stolen from my mother by my best friend Todd back during our law school days.

Just after lunch, the wind and waves had grown pretty frisky for a tender open boat. The organizers decided to limit teams to 16 paddlers so that the boats would ride higher in the water. I thought most of the boats would sink in the final heat anyway. None did, but one boat lost its steerswoman, one of the two people trying to bail our sunken boat the day before. A lot of us believed that karma was involved.

Check www.towndock.net. Their complete photos are not posted yet, but will, no doubt, be very good as their "Press Boat" circulated among the racers all day. Sample photo below showing the dragon heads and high seat of the drummer. 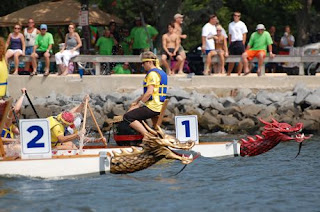