Since my last post, we have moved Wild Haggis back to her slip in Oriental Harbor Marina, one of the few still intact on A Dock, mainly to be closer to our friends. None of the docks have power nor will they for some weeks as the surge entirely submerged the power pylons. 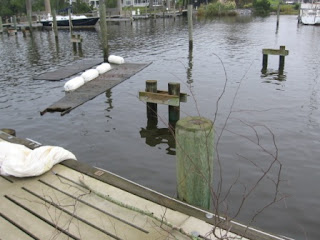 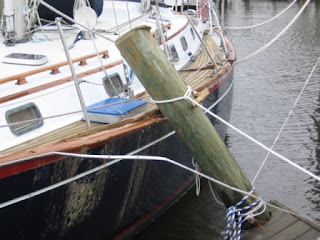 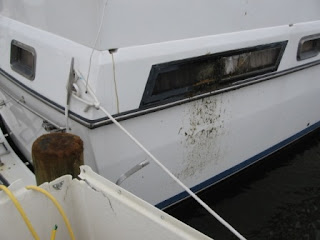 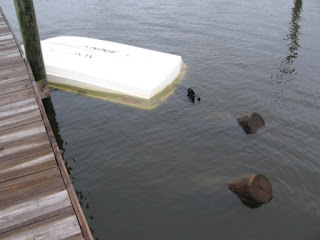 For our friends who rode Irene in South River, the front side of the hurricane was not as bad as the backside. The front side lasted long enough (when you include the tropical storm force approach winds) that they all hoped the hurricane had passed. But the brief calm was the eye. The backside west winds howled for several hours more. Irene was a huge storm that seemed to have no end.

It was during the backside of the storm that boats in marinas began to sink as the winds blew the storm surge out, chafed and snapped dock lines and pounded boats into docks and pilings. Only one boat sank here in OHM, a 40 foot power boat tied in the slip directly across the fairway behind our slip. Of course, except for two derelicts, no one left their boat on A Dock, our dock, the outermost in the harbor. 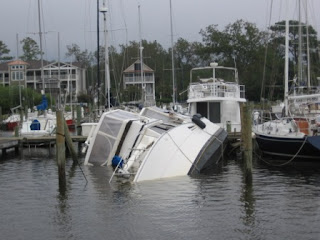 We watched the Towboat US crew raise Robin's Nest, first with air bags,then with pumps and a "crane" (really a large backhoe on a steel barge).Our curiosity turned to concern when the barge arrived. Although I presume its crew is experienced maneuvering the unwieldy craft, we piled our fenders on our stern in readiness for the barge swinging toward us. 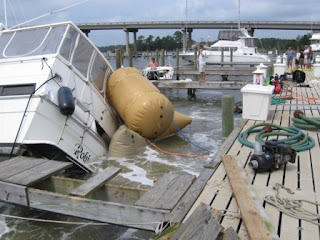 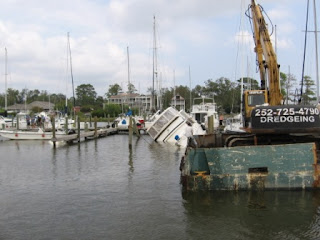 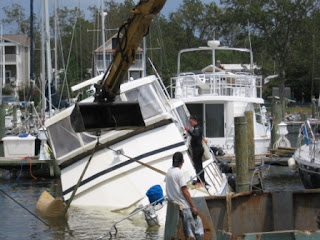 The barge crew dropped tow steel pilings at the stern corners of the barge to hold it in position. Unfortunately, with nothing to hold the forward corners, the barge could twist as the crane lifted the bow of the sunken boat.And it did twist. Toward us. With each effort to lift the submerged bow, the crane was pulled downward, lifting its tracks off the barge, looking like it would topple into the water. This created sideways pressure on the unanchored front of the barge so that it pushed closer and closer to our stern. 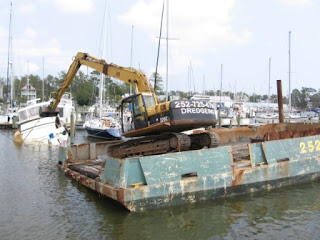 After they re-floated Robin's Nest, its propeller remained jammed in the finger dock. Towboat decided to apply brute force and soon snapped two lines. During this episode of the salvage project, the boat trying to wrench Robin's Nest free would aim toward the slip adjacent to ours, then swiftly accelerate. If the captain had not been aimed away from us when the tow lines snapped, he would not have had time to stop before colliding with our stern. He held our attention for the couple of dozen runs he made. 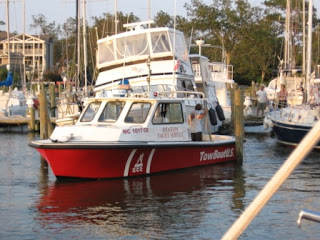 All in all it was a full day of nervous entertainment. Our boat having survived the hurricane without a scratch might be smashed by the recovery of a sunken neighbor. I estimate consumption of at least a case of beer among the dockside spectators along with more armchair commentary and advice than any professional salvage crew wants to hear.

The few of us living aboard are now living as if on the hook, providing all of our own power needs. But we do have access to hot showers.

Bama (Village Food Emporium) served sandwiches beginning the day after Irene passed despite having no power. Brantley's, the local diner, reopened yesterday. M & M's hopes to reopen today or tomorrow. Sadly, The Bean is not open; Eric, the owner, says it could be two to four weeks before they can serve coffee again. Thank goodness Bama has coffee.

The Fire Department trolls the streets announcing over loud speaker "Free ice and water at the firehouse," Hot lunch at firehouse at 1:00," or "Dinner at the firehouse; tonight is Roast Duck stuffed with rice and asparagus. Dessert is a la carte."

A lot of debris remains but more and more is being piled roadside for pickup.

Capt. Ross and Jim Edwards both took waves through the front of their homes on the Neuse River.They are learning what Federal Flood Insurance does NOT cover, like any of your home's contents.

Still, people are helping and comforting each other, one of many endearing qualities in Oriental.

As always, check www.towndock.net for good coverage and photos.
at 9:36 AM