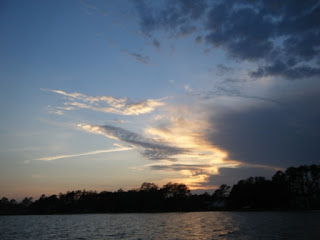 It is truly spring on the water. The sea trout have returned and the first drum are in the creeks. Days are bright and warm with cool breezes and winds. Nights are mostly mild, though recently frigid. The night sky is deeply clear, the stars sharp.

Wisteria has burst abloom everywhere. Azaleas suddenly thick. A mating pair of ospreys have nested on the peninsula to our east. A pair of loons have been whistling to each other in the morning when the Laughing Gulls are not out of control. Grebes and terns have joined the ubiquitous cormorants and great blue herons. A few scaup passed through as did huge rafts of scoters.

A mink scampers along the seawall. A family of otters swim along the shore. More pelicans arrive.

Along with the winged migrants, there are the human rites of spring, including the beginning of cruisers heading back north from their winter moorings in The Bahamas and Caribbean. It has been quiet and sparsely attended over the past couple of weeks, but the pace is picking up. These early birds are likely wishing they had waited to head north later, the shocking contrast of their warm island winter abruptly sobered by our tentative spring.

One dear friend who arrived last week is Bill, a solo sailor I have mentioned before, who sails with two birds (a Cockatoo and a Quaker Parrot), both very personable and demanding. Bill spent most of the winter in Georgetown (side trip to Long Island's blue hole, Dean's) where he is the choir director. Bill joined us for a tour of the annual boat show, then made us a fine chili and a delicious cole slaw. The birds entertained us with their antics, and a little nip here and there. It was good to catch up with a friend we see only twice each year (though we missed last year) when he is traveling south and when he returns.


The human rites of spring include the Pet Parade and the Boat Show. The Pet Parade is really a dog parade. Costumes count even though some of the canines look pretty embarrassed, as did the winner year before last, an adorable Dorothy of Oz fame in blue gingham played by Max. Max was not into being in drag, but he won first place. Sorry the photos are blurry. This is not a fashion runway and the rain was picking up, so no one stopped. It was the wettest and shortest Pet Parade on record, but a good time was had by all who fled early enough not to get soaked by the sudden squall .


The boat show fared better this year than last with no gale force winds to bring down the tents. Lots of boats in the water and lots of dreamers to walk through them. The latest electronics and other tidbits to covet. As we walked past the Beta Marine Engine booth, the salesman asked if he could answer any questions. Too quickly, Beth said no. I reminded her that I have a birthday coming up soon; wouldn't a new Beta diesel be nice? Yep, I was dreaming.