Back Roads along the Pamlico

This past weekend took us through the wild lands of the Alligator River National Wildlife Refuge. For the second time this year. We took advantage of the (as yet) un-tolled ferry from Aurora to Bayview while we still can. What was free this week will cost us $33 as of 7/1. (Three auto trips plus three passengers.)

Our route wound all directions as we slipped past the edges of the big waters surrounding the blackwater peninusula between Pamlico River, Pamlico Sound and Albemarle Sound. With Taylor and Beth joining Cameron and me this time, we returned to Belhaven (the museum was closed and we did not have the time to wait for it to open), Englehard for a Big Trout Cafe seafood sandwich lunch and a tour of Gibbs' General Merchandise (everything you need for boat, house or farm, but no .22LR bullets to be found), then to Stumpy Point and Manteo before turning north at Whalebone Junction for Nags Head and Kill Devil Hills.

It was a summerish day with a cooling breeze off the water. The green farm fields reached away to the far woods with newly planted corn, more corn and soybeans here and there. Even the burned-over forest near Stumpy Point budded full greenery from those trees not killed by the fire of 2011. At Stumpy Point, I stopped to shoot more photos of the small harbor that I had captured last year in some flat morning photos. To shoot on the side of the harbor away from the highway, I turned off the main road toward the "emergency" ferry landing that is used when Highway 12 out to Cape Hatteras is overwashed by hurricane surge, creating a renewed connection between sound and ocean.

As I parked beside the fish house, a voice from around the side asked if I was stopping to take photos. I replied "yes," and a man splattered in blood red from shoulders to toes poked his head out from behind a stack of traps and told me to feel free to explore all I wished. After I took all the photos I wanted, I walked over to thank him for his openness and met Robbie Midyette, a ninth generation Stumpy Pointer. He talked excitedly about being a waterman, the challenges and changes. He talked worriedly about the increasing weight of government control and the aggressive attitudes of young officers with weapons performing routine license and catch checks.

Robbie also suggested I look for a book by Henry Plummer titled The Boy, Me and the Cat, the story of a 1912 coastal voyage of a small boat that stopped in Stumpy Point before there were roads and water provided the only access. The author was in town when Robbie's great-grandfather was born and recounts the event in the book.

I said farewell and walked back to the car.

"Dad, was he covered in blood?" Cameron asked.

"Yep, he was cutting up body parts back there," I replied.

From our car, it looked to Cameron as if Robbie was covered in blood, splattered from belly to wings and elbows to boot toes. It was, however, just the red paint he uses on his crab traps, bloody as it looked.

We rejoined the girls near the bridge over Roanoke Sound and remarked on the legend of the Lost Colony, then stopped briefly in town to check out the book store.

But our reason for being on the Outer Banks was the wedding of our friends Darcy and Kyle, "the Kids," about whose adventures you can read in their blog http://www.ofwindsandwater.blogspot.com/. We met them our first year on the boat, became alternate parents of sorts (with none of the responsibilities of their real parents, just the fun) and with whom we had a rendezvous "at sea" in the Waccamaw when we were heading south to Charleston and they were working their way back to Oriental after a long southern voyage. Barefoot and smiling with the joy of the day (the scattered thunderstorms spared them) and the event, they married on the beach beside a windy Atlantic Ocean, friends and family pelting them with beach balls at the end of the service. We wish them continued happiness; they are wonderful people we are pleased to call friends.

******************
Afterword:
As a final, tangential thought, I came across a Celtic Knot that I like thanks to Taylor. Although we cannot know with great certainty what most of the Celtic symbols meant to the Celts, scholars suppose that this one, with its four part aspect refers, inter alia, to the four winds (directions), the four elements (fire, air, wind and water), the four seasons, etc., all meanings apropos our life here on the water. 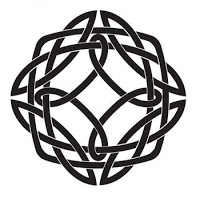