There is an empty place on the cockpit bench and an empty space on the saloon rug. Scout died in his sleep just before sunrise yesterday morning.

It will be a different life without him. He was so entwined in our lives and memories for the last dozen years, our happiness and sorrow, our adventures and misadventures, always a comfort and sometimes a source of laughter.

My sister found Scout and his brother, Cooper, as puppies at the same time we were moving from Atlanta to the mountains south of Asheville. My wife, Beth, named him Scout in honor of the main character in her favorite book, To Kill a Mockingbird. [Yes, she knows that the "real" Scout was a girl.] So Scout began cabin life with us. We decided to try crate training him. He seemed to like it just fine, but then Beth left him in the crate one day while she took a shower. When she emerged, Scout's crate was full of snow, and it was not even winter. He had thoroughly destroyed an Orvis dog bed, the poly fill snagging all over the sides and top of the crate. He wagged gleefully, neck deep in white stuff.

As a clumsy young pup, Scout loved our pastures, chasing butterflies at full speed before tumbling tail over nose, legs over muzzle, into a small swale that crossed the pasture to the creek. That dip in the ground always surprised him. He also loved bread and pizza, but would not even taste a mushroom. Nor did Scout like raccoons. We never knew why. Possums could wander onto the back porch and make a racket eating the cats' food, and Scout said nothing. But mention that there was a raccoon, and he went berserk, barking incessantly while feinting as if he would break through the back door.

Whatever the adventure of the day, Scout was game so long as he could be with us. Camping, fishing, hiking dusty or muddy mountain trails, paddling lakes, swimming in mountain streams. He played harder than we did, kept a watchful eye on all of us and collapsed with happy fatigue when we returned to the cabin, curling up beside the woodstove. 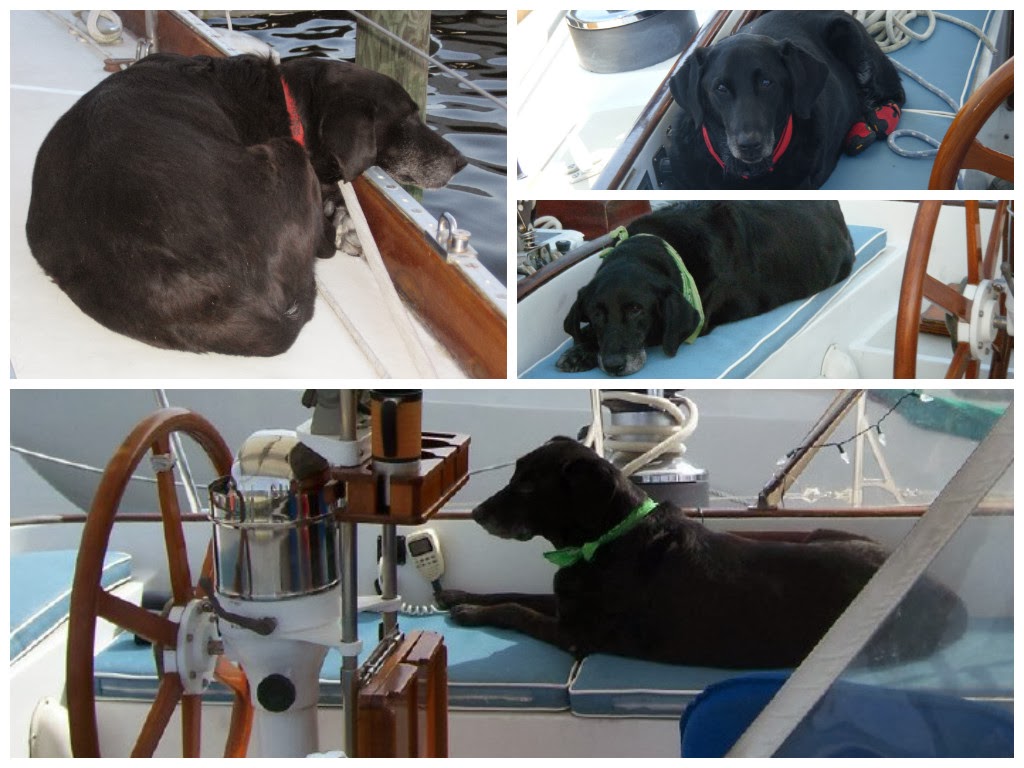 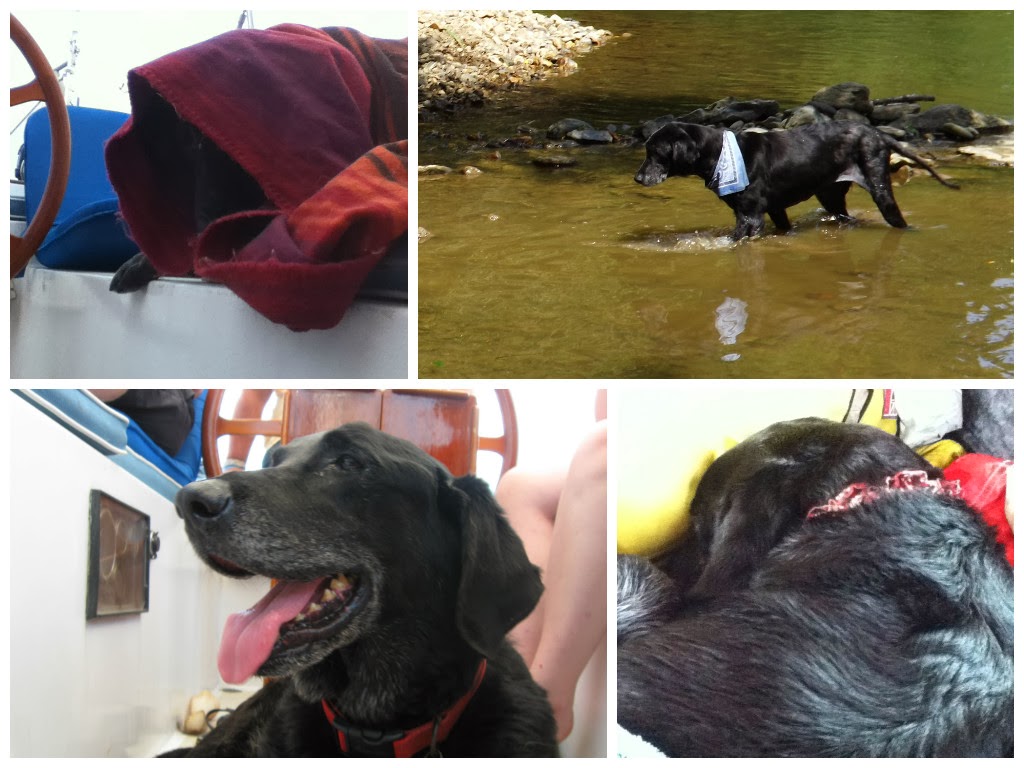 Our first spring at the cabin, we drove to the Outer Banks. Scout had never seen the ocean or wide empty beaches. He ran to the edge of the sea, and the sea surged around him. He knew it was a game, so he darted to and fro, back and forth, snapping playfully at the waves, retreating too late to avoid getting wet. Taylor was walking along minding her own business, also enjoying the view, the sounds, the warm sun on a chilly day, when out of nowhere...as Taylor describes it:

"My back was turned while he came barreling toward me and next thing I knew, he slammed into my legs, the sensitive part right behind my knees, and completely took me out. Totalled, I flew into the air and landed in the wet sand, which, of course, glued itself to the fleece I was wearing. It hurt, and felt pretty uncomfortable, but mostly it was hilarious. Scout never missed a beat and continued sprinting down the shoreline."

During Scout's time with us, we had five cats. They completely dominated him, even when they were kittens. The smallest fluff of fur could wind itself into a ball on Scout's bed and he would stare at it, maybe whine a bit, but he would not risk lying down beside the kitten. The cats never did anything other than hiss at him, but he knew they had claws. Scout gave up his crate when one of the cats, Harley, was hit by a car, mangled badly and needed to be fed food and water through a syringe for a few weeks. Scout would gaze wistfully at the crate, no doubt wondering why the black cat had taken his space.

He was not much for wildlife, never alerting us when a bear was destroying the bird feeder on our front porch at four in the morning. But one day when Beth, Taylor and Cameron were in the school (a rough little board and batten shed with one window and a door), Scout began stalking a squirrel. Beth and the children stopped what they were doing to watch. Scout took only a few more steps before all three were laughing hysterically. Scout was tiptoeing toward the squirrel. No predator's crouch for him.

When we decided to move onto the boat, we bought Scout red booties with Vibram soles, the sticky kind that climbers often wear. To get him accustomed to wearing them, we put them on while we were in Oriental; Scout with his red booties was an instant hit at The Bean with his distinctive and offbeat fashion statement among the many dogs and dog owners in town.

Not only did we expect the booties to offer better footing on deck, but they would prevent his claws from puncturing the inflatable dinghy, his only way on and off the boat when we were underway. In the Waccamaw, we anchored in Bull Creek, and Cameron and I took Scout ashore at the Wacca Wache Marina a few miles downstream. By then, Scout was comfortable with the grip that the booties provided when he was in the dinghy. Too confident, as we returned to the boat and lifted the dinghy on its davits, Scout decided he would exit onto the boat. Too soon. The dinghy dipped when he jumped, and he landed on the transom, sliding backwards into the fast current with a woebegone expression of "what did I do wrong?" He did not object when I dragged him out of the water over the side tube of the dinghy by the scruff of his neck.


As you might imagine, with more than twelve years of memories, the stories could go on for much longer. We remember our time with Scout, and we will tell the stories to each other, forever appreciating his unconditional love and patience.


Ever with us in our hearts, we will look for him in the cockpit, in the saloon, on the shore and in the mountains when we travel there. We will miss him. 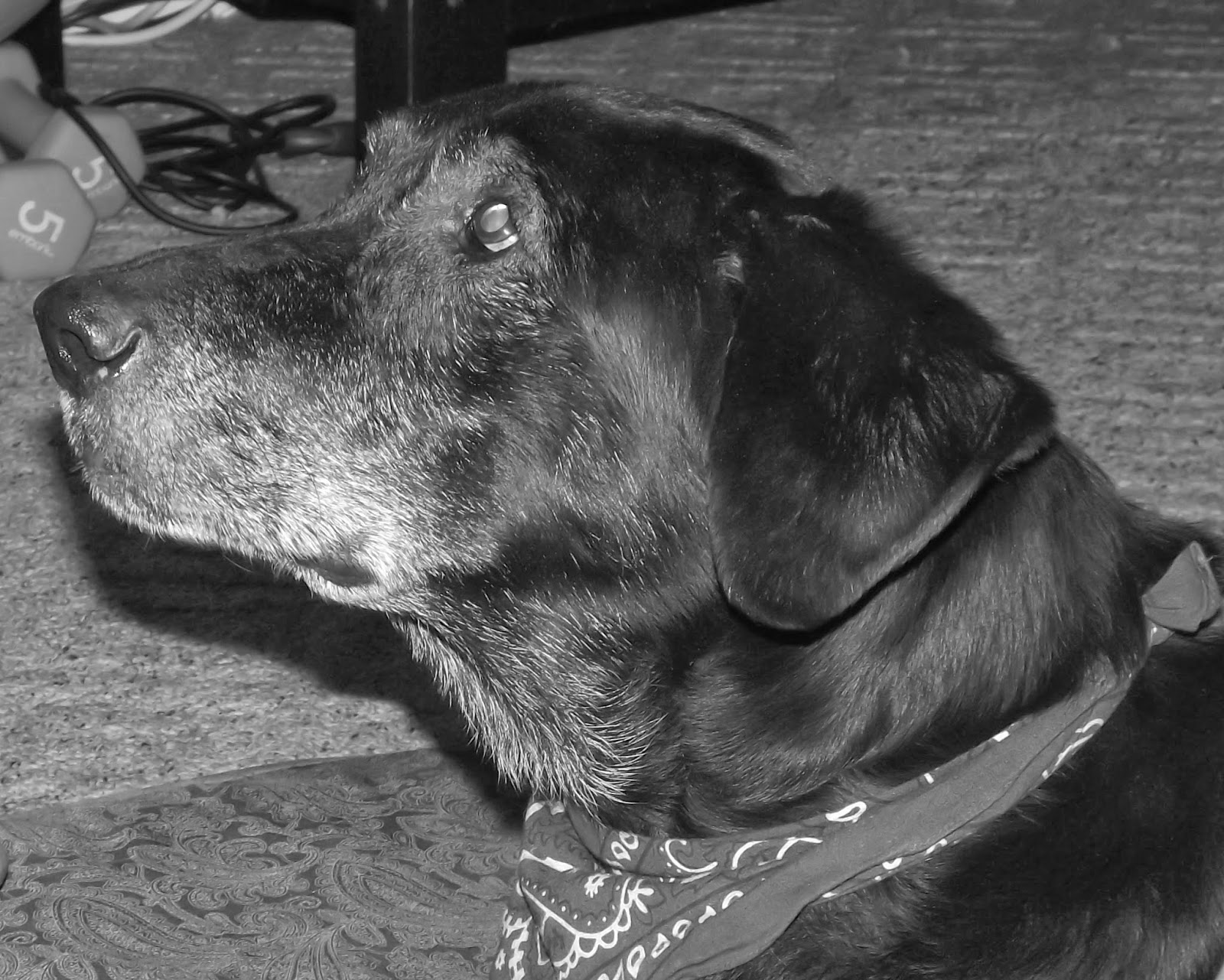 Sunset & evening star,
And one clear call for me!
And may there be no moaning of the bar,
When I put out to sea,  ...

Twilight and evening bell,
And after that the dark!
And may there be no sadness of farewell,
When I embark.