Today’s medley (at least one of each of the following):

A gloomy, humid day under clouds while rain looms and the forecast promises the first cool nights of autumn. Five storms hover around the Atlantic. Fortunately, only one may be poised to reach the east coast. La Palma’s volcano is erupting in the Canaries; scientists refute the potential for a mega-tsunami that would inundate the east coast of America. Fires continue in California and threaten the giant sequoias. Earthquakes in Tonga, Italy and Australia as well as western states in the US. Flooding in Atlanta. Drought in Canada. The planet seems to fall apart around us.

In the midst of catastrophic global activity, the pandemic rages on, although now more localized and mostly affecting those who choose not to be vaccinated. Haitians gather under a highway bridge near the Mexican border in Texas hoping to immigrate to the US.

It is autumn, trees faintly mottled as leaves begin to brighten along the coast. Even the poison ivy, always the first with bold yellows, merely hints at its change. Sassafras will follow with mittens of deep and brilliant reds. Despite a few varieties of oak, most of our woods are pines that shed their russet needles.

The summer garden breathes its last breath with smaller fruits and spent stalks. Perennials prepare for dormancy through the winter. Even the growth of lawns slows with the declining angle of sun.

As the air cools, so cools the water, and we hope for oysters struggling to recover since being decimated by the surge of fresh water from Hurricane Florence a few years ago. More and more the winds whip angry seas with whitecaps and foam shredding the blue water. Rain clouds scud above the waves, echoing the anger below, tearing the horizon from edge to edge as grays merge with shades of gray and color disappears from the surface. Change is furious.

Unlike the mountains where forests transform from ridge top to valley with a linear palette of golds, reds and browns, pines remain green (as do the blacks of balsam and spruce in the west), and autumn is a subtle passage of time that ends somewhat suddenly with a cold slap of arctic air dropping into the South when we notice that all the colors have vanished except the pines and the starkly deep blue of clear dry winter air that reflects on the wide open waters. A photo of a sunken trawler hanging on the wall reminds me of the rough and raw days between now and spring. 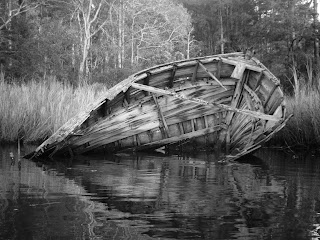 Soon, the southern migration of boats headed to The Bahamas for the winter begins. This is the enchantment of living in or near Oriental, the variety of boats, especially sailboats, from plastic to vintage wood. The mariners from Canada south, from Europe and, in any given year, most anywhere you might name. All bring their tales of storms and pristine beaches, close calls and new friendships, of broken boat gear and repairs in far places. Sites seen at sea and stories of captains who should not be and the crew who abandon them.

Aside from an inability to navigate, even in the ICW, or failures to maintain a continuous watch while underway, a common weakness is not understanding how much anchor rode to lay whether anticipating weather or not. When anchoring overnight, any conditions might change without warning or notice, so a minimum scope of 5 to 1 is appropriate. Sounds easy enough, but the devil always hides in the details. How should the captain measure the needed scope? Many check the depth and release five times that. Say, 10 feet deep, so 50 feet of rode. But what if the depth is low tide and the high tide is five feet or more? Now the captain needs 5 times 15 feet for 75 feet of rode. But the captain has overlooked a key measure, the height of the bow roller above the water level, and this could easily be 4 to 6 feet. Add that and the boat should have another 20 to 30 feet on top of the 50 to 75 already counted. Roughly 100 feet. The 50 feet becomes half of what should be laid. Viewed another way, the captain has used only 2-3 times the necessary scope, far too little if a sudden squall strikes or waves lift the bow in a rocking motion that dislodges the anchor from the seabed, releasing the boat to navigate on its own, to run aground or collide with obstacles, fixed or floating. The careful captain never forgets that Murphy rarely leaves the boat and never when you hope he has. Lay too little scope and the fury of change will find the careless mariner. The resulting experience will educate all involved, providing a good story for a cold beer and a better lesson for how to change to practices.

Autumn is not the easiest season to travel south as the heat of summer partially remains and the cold of winter arrives early to form a tempestuous mix of weather. More than once southbound friends have found their weather window closed when they had planned to depart. Their two day respite in port becomes a week of boredom while they anxiously await a good time to travel by ocean and avoid the crowded highway of the ICW.

Equinox suggests equality, but change lives on the edge of conflicting balances like one season becoming another.