Some photos from Ocracoke, current location of Wild Haggis. Our crew had an excellent sail from Oriental two days ago and are happy to have returned to a special place, this time in our boat. 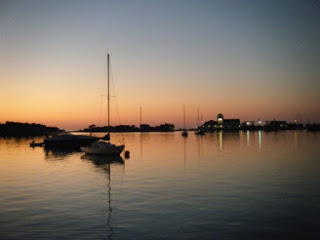 Sunset across the harbor, Silver Lake 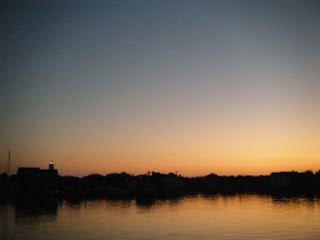 Ocracoke Light (to the left) at sunset from our anchorage


Ocracoke Light is my all-time favorite lighthouse and the second oldest still operating. It was built in 1823 of brick (850,000 of them). We had a chance to go into the base of it yesterday, the first and only time it has been open to the public in my many years of visiting the island. 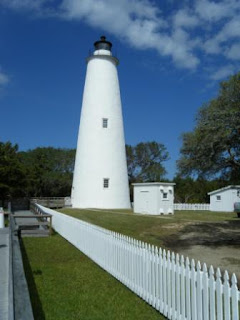 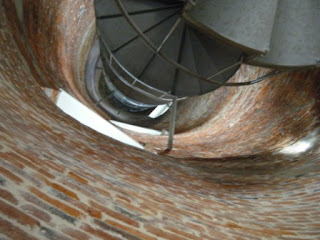 If you look closely up the tower, you may be able to see that it is not truly circular, but somewhat deformed due to ambitious masons who laid too many courses at one time over cement that had not yet set up enough to handle the weight. The steel spiral stairs replaced the original wooden stairs built into the side of the tower. The keeper had to haul five gallons of kerosene to the top every day. At the top of the stairs, there was (and still is) a ladder to give access to the light room at the top.

Ocracoke has never had a surplus of water, so it has always depended on cisterns to gather rain. (There is now a desalination plant, but you know how that water tastes.) The old cisterns came in various shapes a sizes. Some were incorporated into the structure of the house; for instance, a concrete porch with traps for allowing roof drainage into the cistern. A couple of old ones appear below. (The new ones are, of course, hideous black plastic.) 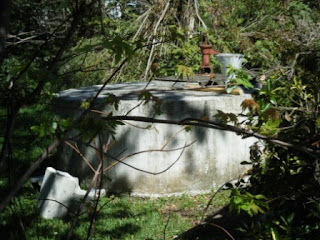 Circular with a pump on top 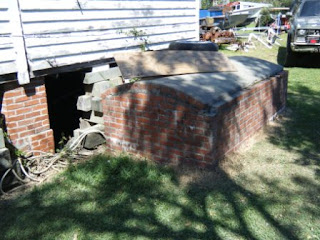 Ocracoke still has some of its old island charm, such as oyster shell dirt lanes winding through the gnarled and twisted live oaks and junipers. Mark's Path is one lane. Howard Street is another, named for the Howard family which has lived here since Blackbeard's time (an ancestor is reputed to have been a member of Blackbeard's crew who escaped after the battle that claimed Blackbeard's head in Teach's Hole). 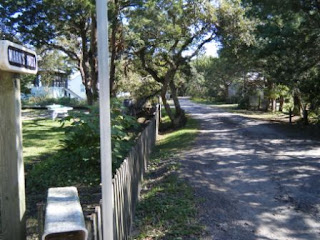 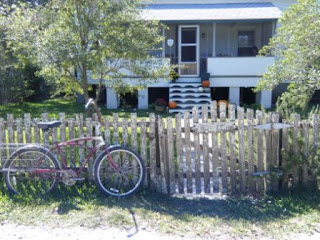 A Howard home on Howard St 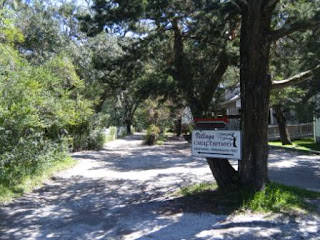 The main intersection on Howard St with sign to Village Craftsmen, owned by Philip Howard 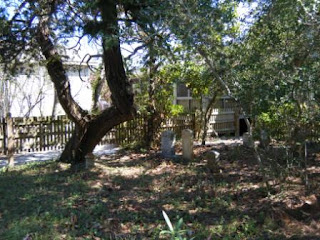 Cemetery in side yard on Howard St 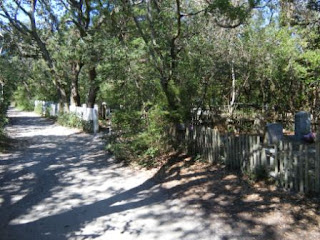 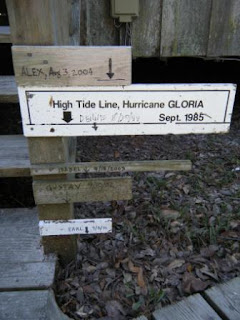 Philip Howard publishes a nice blog called Ocracoke Island Journal with daily (almost) musings as well as periodic history of the island and its residents. http://villagecraftsmen.blogspot.com/

It has been clear, cool and breezy, perfect autumn weather on the Outer Banks. Wild Haggis swings in the wind in Silver Lake, visited by otters last night and dolphins this morning. We dinghy to and fro for walks around the village, coffee and smoothies at Ocracoke Coffee Co. and fresh seafood from the Ocracoke Working Watermen's Association Fish House, the last remaining on the island. It is an island success story with a commnity non-profit formed by the fishermen to preserve the fish house before there was none left on this island, many of whose residents depend on fishing for their livelihood. The Community Store has reopened since our last visit and offers canned goods, cleaning materials, fresh produce, beer and movies. What more do you need?