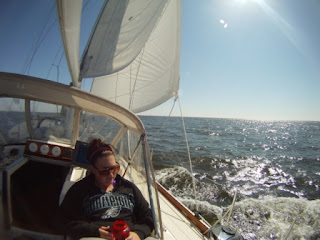 Sailing to Ocracoke on a perfect day 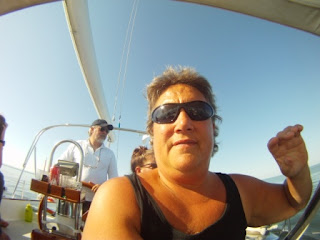 Sailing to Ocracoke after it warmed up 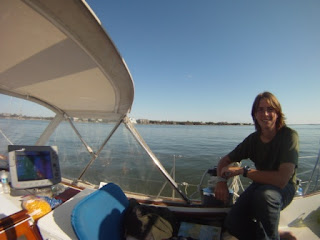 Arriving off Ocracoke (lighthouse in background)

As a footnote to the previous blog about our trip to Ocracoke, the return sail was a little rough at the start. As we cleared the Ocracoke entry channel, Big Foot Slough, we turned west and rode beam to a wicked short period sea for more than an hour until we could ease more southerly. My crew was a bit green about the gills as they say, but they stayed fast and rode it out. By late morning they were only irritated that I could eat while standing in the cabin while they were all in self-imposed exile topsides. 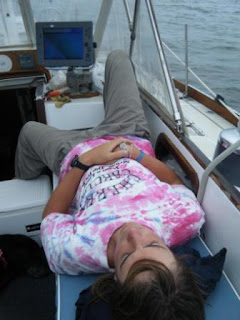 Cameron coping with the lumpy seas 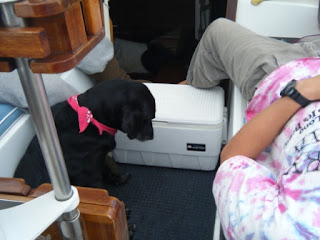 It was a gray and colorless day of stiff, cold wind and whitecaps slapping the hull. Then the dolphins joined us for a mile or so. Big males surfing the waves right up beside us, closer than I have ever been to the larger dolphins. (They surfaced and dived so quickly that none of my camera shots caught a whole dolphin at the surface.) We made a good broad reach down the Pamlico and then ran downwind on the Neuse, arriving at Marker #1 just behind our slip mates, Kim and Steve on Fine Lion, who had been out to Cape Lookout Bight with an overnight in Beaufort. 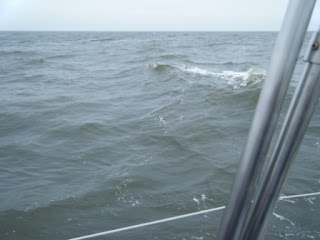 I swear there is a large dolphin under that small whitecap ﻿


Approaching the channel into Oriental, Steve thought he recognized Wild Haggis, but dismissed it when saw the boat turning toward Whittaker Creek, or so he thought. What he saw was Taylor at the helm for the first time under sail. She actually sailed quite well, but following a compass bearing was entirely new to her. We followed Fine Lion into the marina where Tony and Jenny were on the dock to catch us coming in.

Autumn in Oriental is marked by the southbound migration of cruisers. Every day, new boats arrive, anchor in the outer anchorage, in the harbor where it is partially protected by the jetty or deep down Raccoon Creek at the Town Dock, where returning boats no doubt have been expecting to tie up and stroll across the street to The Bean for a cup o'....

Town Dock is open. The Bean is not. However, the TownDock.net investigative journalist staff have exposed the building's owners as laggards in getting the flooring replaced so The Bean owner, Eric, can once again sell coffee, the New York Times, provide a local hangout for gossip and political news and put his eight employees back to work.

As for the boats, many have in common some or all of the following: wind generators and/or solar panels, bicycles on deck (usually with very small wheels), a colorful kayak pinned along the lifelines and quite possibly some laundry hanging from the rigging. They will have been traveling down the Chesapeake Bay through Norfolk, then down the Dismal Swamp Canal to Elizabeth City or east past Coinjock. They are less than a week into their journey south to The Bahamas or further to the Caribbean.

We will not be joining them this year. Nevertheless, when I suggested to my crew that we head north for a weeklong tour of Albemarle Sound (Elizabeth City, Edenton, Columbia on the Scuppernong River), I was vetoed because all of us look forward to seeing our local friends off and our non-local friends as they arrive from the north. Two couples who have had their boats here at OHM and who are good friends will be departing the end of the month subject, as always, to weather. One couple will head for the remote and sparsely traveled southern Bahamas. We will see them next year when they return to Oriental late spring. The other couple will embark on a six to eight year circumnavigation. Although we will maintain some contact through emails and blogs and such, it is unlikely we will ever see them again. Such is the nature of cruising friendships. Sad to see them leave, but excited for them and what they will see along the way.