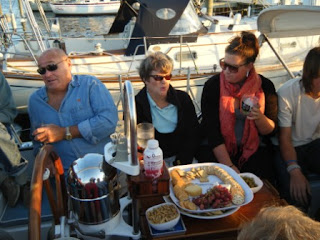 Cocktails in our cockpit. Bill (arm only to left), Steve, Kim, Taylor and Cameron (almost)


As with monarch butterflies, ducks, geese and wandering manatees, autumn is the season for cruisers moving south for the winter. Over the past few weeks, boats from all over have been arriving in Oriental heading south, mostly for The Bahamas. Flags from Switzerland, England, Scotland, France and, of course, Canada.

A couple of weeks ago, as we were finishing breakfast, the phone rang. It was an out-of-state area code, so we ignored it. A voicemail popped up. It was Bill T, a solo sailor we met last spring (2010).  Bill was ringing us to see if we were available to catch his lines as he came into Bill and Sue's slip. All of us were thrilled. We had enjoyed Bill's company last year and looked forward to catching up.

Bill had not sailed to The Bahamas last year because he was renovating his mountain home. So, it had been almost 18 months since last we spoke with him. He had welcomed us to the cruising community with the gift of an LED flashlight and good conversation over a few beers. We had missed seeing him last fall and were happy to have a chance to catch up. He had already spoken with Bill and Sue, so he knew that we were in Oriental and that Taylor, whom he had not met last year, was with us. Notwithstanding the passage of time, we picked up where we left off, a great example of the best of the cruising life.

Bill does not really sail alone; he has two birds (cockatoo and small parrot), both of which talk. He introduced us to another sailor traveling solo, Alan. Both of them have Pearson 424s, ketch rigs. Over beer and wine, we settled into our cockpit one evening and his the next, trading stories and laughter, experiences good and bad, lessons learned.

Anthony arrived in a classic Grand Banks trawler.  From the dock, he asked me and Bill T if he should lock the electronics on his bridge, and we replied that that is not usually necessary in Oriental, particularly if he was not going to be gone for long. He said he would return in a few days, then asked if he could take our photos. After a quick shot of Bill in his cockpit, he asked me to lean forward so I was clear of my dodger. I did, thinking it a bit odd, but harmless. When he had departed, Bill told me that he is the retired head of state police for a big northeastern state. Ah, casual mug shot, just in case.

His crew was a guy who looked familiar, but I could not place him. He said his name is Brad Cavanagh which made him seem even more familiar, but I still could not put together the connection, if any. I said so to him, and he laughed it off, saying, "I live in New Bedford, you know, 'Call me Ishmael'". I googled him and found that he was one of two survivors of the sinking of the Trashman, a grueling tale of a sailboat going down off the North Carolina coast in a big autumn storm. The crew lost its life raft and escaped in the dinghy with no supplies. They were surrounded by sharks virtually the entire time afloat. After almost five days, one woman had died of septicemia. Two of the men had drunk salt water, lost their judgment and stepped into the ocean where they were attacked by the sharks. I have read Deborah Kiley's book (originally titled Albatross and now titled The Sinking) and have seen the re-enactment on an episode of "I Shouldn't Be Alive" in which Brad was interviewed. www.nationalgeographic.com/adventure/0111/profile.html  Brad was quite lighthearted and friendly, only anxious to return to his home, wife and children. Mark loaned Anthony his car so he could take Brad to the airport in New Bern.

The best part of the Southern Migration has been seeing old friends who live elsewhere as they pass through. Bill, Sue, Bill T. And meeting new friends like Alan, people who enliven our spirits, teach us new things and stimulate our minds. As we think about our Oriental friends who are traveling, we also think about our new friends. The weather has been challenging this fall with a series of small nor'easters rolling through every few days. That has passed now, so Tony and Jenny, who are heading to the Caribbean and literally around the world, finally have a good weather window beginning this weekend. 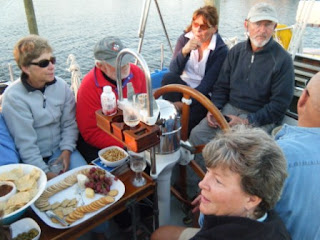 
Most of our friends have not been able to get offshore, so have had to endure the wagon train of boats that ply the ICW, dodging shoals, huddling in the winds and currents waiting for bridges to open and scrambling for the good anchorages before the day is too short. Still, they are happy, enjoying the warmer weather as they move south and looking forward to winter in the tropics.

It has been unusually cold here. A week ago, the temperature dropped below freezing with stiff north winds, a taste of winter. That was followed by several days of Indian summer. But tonight, temps plummet again under strong, cold north winds, the backside of a cold front that terrorized the southeast with heavy thunderstorms and tornadoes.

Tomorrow night we will bid Tony and Jenny "Bon Voyage" in the truest sense. They will cast off Saturday morning and head directly past Morehead City out Beaufort Inlet into the Atlantic Ocean bound for the Turks and Caicos

Soon the Migration will end, and we will not see many cruisers passing through. For the winter, only Pat and Judy, liveaboard friends from Colorado (from snow to sea) on a Passport 40 just down the dock from us, will remain. We will enjoy their company. 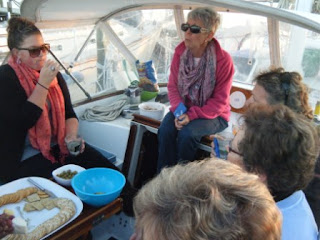 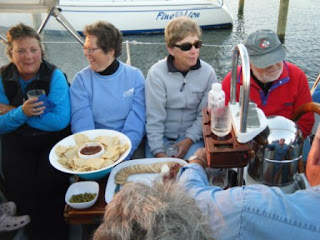