Lately, our lives and humor revolve around the weather. Heat, heat and more heat. We survived one heat wave with no real break before the one that followed. Although today is cloudy, thus not as hot as most, it remains quite humid and sticky. Scout likes the concrete under the club house as the sun never warms it, and he can catch whatever breeze there is. Fishermen hide inside despite the lure of tarpon rolling on the slick waters of the Neuse. Cameron spotted a manatee in our marina a few days ago, at first thinking it was a whale. Everything seems out of time, out of sync, out of place. This is not my favorite season.

Our only weather break has been a fine thunderstorm early last week. A cool stiff breeze swept in with the clouds. 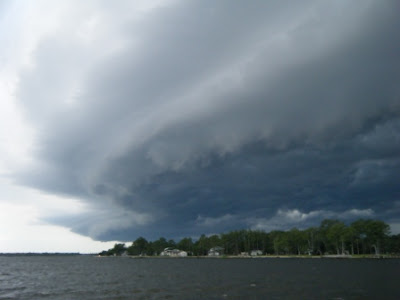 Then it was gone, having dropped more than an inch of rain, but leaving a windless sea in its wake.

Yes, there have been a few other storms, today included. But if they do not chill us to the bone, they are of passing interest. We always enjoy the color and light show. We savor what respite the strong winds bring.

The pool, the pool, the pool. My kingdom for a salt water pool. We live on brackish salt water, but do not swim in it due to the "organic" composition, the jellyfish and a recent estuarine fish attack (in SC, not here) I viewed on YouTube. You need the sound on. http://www.youtube.com/watch?v=Hu4QsFX_KyQ Yes, bull sharks have been sighted on the Neuse. I mostly see dolphins, but the sharks can easily travel here due to the high salinity.

As my father recalled when I sent the link to him, the fish attack happened not too many miles from where Cameron and I were swimming summer before last when we anchored Wild Haggis in the Waccamaw. Then I reflected on the huge mullet (36"+) that leapt from the river when he and I were running the dinghy downstream to Wacca Wache Marina. Something BIG had to have scared it into the air. Or so the guy at the marina opined.

Of course, that was the same anchorage where I assured Beth that we need not worry about alligators because the water was deep and fast. Then, the next morning, she spotted an eight foot plus gator lounging on the river bank beside a deep fast current. Oh well. Next time I will expect man-eating danger. And yes, we have gators in the waters around here as well.

What with the National Weather Service warnings, the heat is only slightly less dangerous than the gators and sharks. What is a sailor to do? Right, we should have sailed somewhere like Maine or Nova Scotia, but we did not. So, another month or so, then we will break loose again.

In all seriousness, we are all in this together. The heat wave is nationwide, and North Carolina, particularly the coast, is not as hot as some parts of the country. We have wind, rain and crops which is better than much of the drought-stricken country.

Stay cool as you can.