The Week of the 4th

Oh what a Fourth of July week we had!! As with much of the eastern seaboard, we were having a heat wave, a tropical heat wave. Aren't you glad you cannot hear me croon?

Last weekend, our friends Pat and Judy went to sleep late due to the heat and humidity on the Chesapeake. They woke early (0100) due to the 50 knot straight line winds that began to drag their anchor. It was the same storm that damaged the DC area.

Sunday evening, we were off the boat to watch the European Soccer Championship with Dan and Luann. A storm raced toward Oriental so fast that, in the time it took for me to consider driving back to the boat to put Scout below, the storm struck. 70 mph straight line winds rolled the boat 20-30 degrees (with visual evidence topsides and below). At nearby Cherry Point MCAS, they recorded 84 mph. But the storm did not end there. The winds clocked around the points of the compass twice during the next couple of hours, holding at 15-20 with gusts to 30 until the wee hours of the morning. Lightning spread across the sky and horizon for hours after the initial squall.

Then Tuesday we enjoyed a good old-fashioned picnic with my parents. Fried chicken (breast nuggets), deviled eggs, steamed shrimp, potato salad and pimento cheese sandwiches with iced tea. Fudgies for dessert. All made by Mom except the tea. Yum!

Wednesday afternoon, lots of friends from the marina and beyond joined us for swimming and grilling and cold drinks. The sky clouded up just before sunset with the thunderstorms inland, but it never rained, bringing only stronger winds and cooler temps (cooler, but still very warm). Grilled chicken, dogs and burgers. Slaw and chips and Bogue Sound melon, slightly larger than a basketball and blood red inside. Sweet and juicy. Beer, sangria, cold water and wine.

Thursday night, Butch steamed crabs for Ashley's family and some other marina sea gypsies, including us.

Aussie cruisers Keith and Jennifer decided the marina needed to join the parade. Keith organizes the Rotary Club parade in their village down under, so he insisted on decorating the marina van.

Saturday, we went to the Croakerfest parade in the morning, then strolled along the festival food line savoring the aromas, but avoiding the heavy and hot fried foods. Burgers and brats and fireworks with Steve and Kim over Green Creek at night. 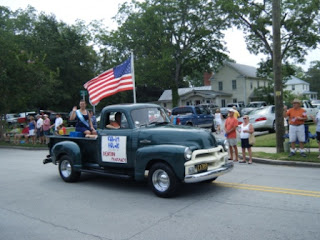 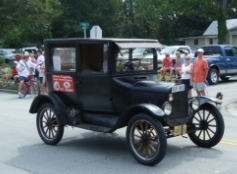 There is no counting the number of people who lined the parade route. It was warm with a soft breeze. There were more than 120 entries in the parade which included, some of which you see above, families riding their bicycles, the county library mermaids, boats, decked out cars and trucks and even milk jugs. Lots of American flags, political and religious messages. But mostly fun. Create your own scheme and come out next year. Paul is always looking for more entries to make the parade long and entertaining. Maybe next year I will be able to convince my family and friends that it is easier on the eyes (and better for the camera) to be on the shady side of the street.
at 11:38 AM