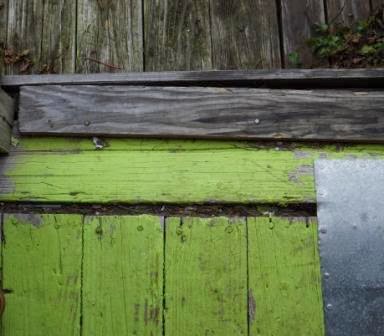 Our good friend Bill, a solo cruising sailor, arrived at OHM about 2030 last night. The marina was dark, the dock lit by pylon lights, except in front of the slip where Bill would tie. Bill would ordinarily not choose a nighttime arrival what with the risks that are invisible in the dark: floating objects, crab traps, unlit boats, etc. However, the forecast included a Small Craft Warning, rain and severe thunderstorms for today. Bill would have been happier dropping the hook before sunset and long before he stood a fourteen hour watch alone from Alligator River Bridge and across the stormy, lumpy Pungo and Pamlico Rivers.

Safe in his slip and tired as he was, Bill did what all responsible sailors do. He secured his vessel in preparation for the storm. He might have waited until he had a night's sleep. He might have waited until daylight when everything topside would be easier. If he had, he might also have experienced the abrupt awakening that occurs when the boat suddenly slams into a dock or piling because a line was not properly secured. Then he fell asleep, not long before midnight.

Bill is traveling with one of his birds, Papagayna. She usually wakes him around dawn, but even Papagayna was sufficiently exhausted to sleep in this morning.

I returned to Charisma this morning so Bill and I could grab a cup of coffee at The Bean. On the way, I pitched Bill on the Town's newest initiative: homesteading. For zero dollars down and no money per month, anyone with a boat can grab a place in Oriental's harbor and anchor there in perpetuity. For free. No worries about pumping out waste because the Town has no facility for that. No worry about insuring a boat that you are not sailing anywhere because there is no requirement for that either. We viewed the four homesteading boats that have already seized their places in the harbor. All looked relaxed and comfortable on their anchor lines even if a bit rough on maintenance.

At The Bean, June, our barista extraordinaire, berated me before I could fully cross the threshold. "Where have you been? Where is Cameron? He has broken my heart; he never visits anymore." (Or words to that effect.) I apologized; she fired more arrows, smiling all the while. A friend from Music Night at M&M's, Larry was getting his coffee before hurrying back home to finishing the dinner to which he and Lyn had invited us tonight. Larry makes his own Italian sausage; I cannot wait.

Bill and I took our coffees out onto the porch that overlooks the harbor. Trawlers in for the weekend (they are not allowed to trawl from Friday through Sunday nights) lined the commercial docks on both sides of the harbor. In between, on Town Dock, two sailboats migrating south, one from New York City. And Oriental Marina was full, a rarity this year. Bill remarked how pleasant it is to sit across from the harbor with its working noises, gulls squawking overhead, cruisers arriving and departing. He said Oriental is his favorite stop on the way to The Bahamas. He likes plenty of others, but the feel of the place, the setting and ease of hanging out here makes it special for him.

As Bill spoke, I thought about how long it has been since I appreciated the same things. Familiarity breeding contempt and all that, this is where we live and, though I must try even harder to avoid doing so, it is easy to overlook the very qualities that brought us here over three years ago.


As we chatted, one of our Town Commissioners pulled to the curb in front of the Duck Pond next door. He walked up the steps to kind smiles and "Good mornings." When asked about the upcoming election, he demurred as if he had polling data that forecast his defeat. Of course, Gallup spends very little time tracking our community (and probably would think our town name is an adjective), so I do not know what this commissioner might or might not know. He said that his wife would be happy if he lost. He said he was not campaigning and would not care if he lost. Then he launched a self-serving monologue about "how much I have done for this town." I do know that calling good and honest people "racists" just because you disagree with them is a poor way to court supporters. But he has established a certified reputation as a know-it-all who proclaims his usually erroneous facts and conclusions loudly and persistently as if volume and quantity will make his words true. Others see it more clearly. Self-importance and delusion are kissing cousins.

Having finished our coffee, and with Bill still chuckling about the conversation we had overheard, we left for West Marine so that Bill could pick up some forwarded items. There, I bumped into Capt John who had sold his ketch Bounty after an aborted attempt to sail solo across the Atlantic last year. "I thought you were out of the boating business," I queried. "Down to a ten foot sailing dinghy," he replied. All the fun without the demands of a larger sailboat.

On the way back to the marina, we stopped by the post office where the staff holds mail for transient sailors. There, I ran into Mark, OHM Harbormaster, for the third time today. We talked about the challenges of running a marina in good condition when the owners (OHM is a condo regime) do not want to spend the money it takes to maintain a marina in good condition. Mark is more patient than I, a quality I noted to myself.

It was refreshing to be in town, seeing old friends and seeing our town through the perspective of others. I should do it more often.
at 3:27 PM