Life on the Neuse River

Growing up in coastal North Carolina, many people I knew dreamed of retiring to the coast, and some of them kept a cottage for weekends and summer vacations before they retired. When we decided to dock our sailboat in Oriental, the opportunity to live surrounded by water excited us even though we did not truly know what to expect. We had a dinghy with an outboard and two sea kayaks for exploring the river and local creeks, and of course, we could easily sail the wide river at our leisure. I thought I knew a bit about the river after having grown up in Kinston, a town midway the river’s course. In Kinston, the river flowed a sluggish mocha muddy brown through dense cypress swamps. Closer to the mouth of the river, the water remained dark but not obviously polluted despite my memory of when a local pork processing plant used to dump pig carcasses in the river. Still, the river appeared dead as it stretched for miles with no visible current.

The Neuse River flows from north of Raleigh, the current capital of North Carolina, to the Pamlico Sound several miles downstream from New Bern, the eighteenth century capital of the state when governors lived in Tryon Palace at the confluence of the Trent River and the Neuse. The widest river in America, the Neuse has been thoroughly abused, contaminated by municipal sewage and agricultural spillage along its length. Connected to the ocean thirty miles south by various creeks and canals, inlets and estuaries, the river is salty enough to support all manner of sea creatures from oysters to shrimp, sea trout, red and black drum, tarpon, dolphins and sharks while alligators lurk in the adjacent marshlands. Rumor has it that the only ocean creatures not previously spotted in the river are whales (yes, dolphins are members of the cetacea family). Smart mammals.

While our sailboat was docked at Whittaker Point Marina, we enjoyed a ten mile unobstructed view upstream, our faces cooled by the prevailing southwest winds. Pods of dolphins played in the river and sometimes swam lazily up Whittaker Creek to feed on shrimp. Cow nose rays gathered in uncountable numbers, at times appearing to create an undulating light brown floor in the shallow water of the cove. Jellyfish bloomed seasonally, and blue crabs filled our traps during the warmer months. Sadly, all the oyster beds had expired. On the peninsula, a pair of ospreys maintained a nest in the top of a dead pine that I was sure each storm would topple. But year after year, they called to each other with a high pitched screech and hovered high in the sky above the cove or river scouting for fish they could dive on. We marveled how they always carried the fish back to the nest head first to preserve their aerodynamics.

A soft-spoken gentleman named Mark often walked the dock fishing in the afternoon. He told me his family was tired of fish and usually offered me or other liveaboards a large sea trout or flounder when he had good fishing. Some people think that flounders are limited in what they can eat because of their mouths being sideways at the head of a body that swims horizontally and hides itself in the soft bottom, eyes on top. It is easy to overlook just how wide its jaws can open. Mark once caught a 24 inch flounder with a conspicuously distended belly. The misshapen belly looked like a tumor, so his wife refused to cook the fish. Mark cleaned it anyway because he knew he would eat it. When he cut into the belly, he found the source of the misshapen gut. An 8 inch croaker. Whole. As Mark noted, “That big fish was so aggressive that, even with a whole croaker in its stomach, it still seized the lure I cast. These flounders are more voracious than people think.”

Although we knew there could be sharks in the river, we never saw one and never worried about them because we never swam in the nasty water. In addition to the reports of human waste after hurricanes as well as knowing we were downstream of several cities and towns (including Oriental) that released their sewage, treated or not, the creeks of the local estuaries also hold vibrio, a flesh eating bacteria that killed one person in Oriental while we lived there. Mix a small open wound with infected water and vibrio can flourish. Emergency rooms do not always recognize the threat at first, but even if they do, the patient may die because the bacteria spreads so quickly through the body. Commerical fishermen dose their cuts liberally with bleach. Even Scout, our black Labrador, avoided the water, unless he fell in; each time he swam his eyes and ears would get goopy and need treatment.

As for the sharks we did not see, a wildlife officer assured me that bull sharks were common. I pulled into Endurance Seafood one afternoon and noticed a stuffed six foot bull shark hanging from the roof. I ask Keith if he had bought it from someone. “No, we caught it in our net.” “Near here?” “Yep.” A few years later, a young woman was driving a jet ski and trying to pull her father up on water skis. As she towed him through the water, a bull shark bit a hunk out of his gluteus maximus. Thanks to swift action by his daughter who rescued him from the water, wrapped the wound and hurried him to the hospital, the bite was not fatal.

We associate alligators with the upper reaches of the creeks where the marsh is most dense and few people venture. However, a couple years ago, one of our friends who lives on the river spotted something swimming along the seawall while she was pouring her coffee. Thinking it was an otter, she called for her husband to come watch. He grabbed his binoculars. “Honey, that’s an alligator. Looks about nine feet long.” We have heard rumors of a 12 foot gator up Kershaw Creek, a 14 foot mother gator lounging off the Camp Don Lee beach with her babies climbing onto her back and jumping off, and a 12 foot gator up Baird’s Creek. With perennial reports of alligators all around the area, I never paddle up small creeks without being alert for nests or eyes or any other signal that I was invading an alligator’s habitat. Yet, I have not seen one in more than ten years of living here. On one level, that suits me fine. I would like to see one in the wild (the one I saw in the Ten Thousand Islands was too small to fully satisfy my curiosity), but I know that Murphy’s Law means that I will see the next one at a time and place not of my preference. The gator that attacked a kayaker on the upper Waccamaw in NC in July 2020 (Pedro Jose aka Peter Joyce video of "Alligator Charging Kayak") looked about eight feet or less, but the thrust of its snout was sufficient to capsize the kayak.

Wildlife is not the only hazard in the river. When we lived at the marina, sometimes I would assist inbound boaters, catching and securing a line. Many had never been on the Neuse previously. I recall one power boat manned by two solid construction guys from New Jersey. They had picked up the boat in Wilmington and proceeded to make a long fast run up the Intracoastal Waterway in hope of making it back to Jersey in two days. They said the run had been easy, but they were relieved to reach the Neuse before nightfall so they could tie up, eat dinner and rest before the next long day. As they emerged from Adam’s Creek and spotted Oriental across the river, they relaxed. Too soon. They had never crossed the Neuse and assumed it was a quiet body of water like the rest of the ICW they had traversed that afternoon. But a stiff southwest wind had stirred, and the river was wild with whitecaps. The boaters were unprepared for rough water. How could a mere river lift waves and chop to four feet? We, on the other hand, had both observed and experienced the angry fetch that ripped the river to shreds and crashed the bows of huge phosphate barges with spray that rose twenty feet and more into the air. As I caught the dockline, I looked into the eyes of the “first mate”. He was shaken, his eyes locked in the wide-eyed stare of fear. When the captain/owner stepped on deck, his face revealed the same. He seemed on the verge of tears, the fear of sinking.

“Is the river always this rough?”

“No, you just got lucky. It does get sporty though.”

“God, I wasn’t sure we’d make it across. When we came out of Adam’s Creek, I thought we would have a quiet crossing, home free y’know. I couldn’t believe how badly we were tossed around.”

I just smiled and nodded my head. “Well, you’re safe now. You can relax.” And I thought to myself, you’re in a power boat designed for lakes and quiet water. If you did not know that when you bought it, you have more surprises ahead of you. The two slept late before heading north on a calm river the following morning.

Other wildlife included a myriad of frogs, tree frogs, bull frogs, all mixing in a nighttime symphonic serenade. Several varieties of woodpeckers, kingfishers, mink, and deer. Pelicans, both brown and, one year, white. The annual manatee who overstayed the summer season. Migrating ducks of all species. Never have I so enjoyed living where I was surrounded by all that was wild. There was an odd comfort in being trapped aboard the boat by a winter storm and icy docks with buffleheads and scoters swimming past in the gray and white swirl of blowing snow while I sipped a cup of hot tea. 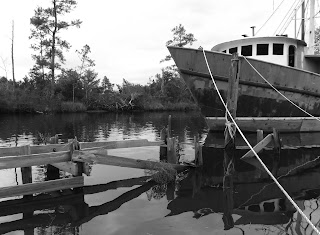