This week, there are three storms off the eastern coast of the US with the possibility of developing into hurricanes, Fred, Grace and Henri. Each emerged as a late player in the hurricane lottery with minimal strength projected. Yet we follow them if for no other reason than to reassure ourselves that they will all remain away from the shores of North Carolina (the Gulf shores and Bermuda have our sympathy).

Every year, June 1 marks the begining of Hurricane Season. The National Hurricane Center posts its list of names for the year and starts tracking potential storms, low pressure depressions, wherever they originate in the Atlantic. The largest and most worrisome seem to spin out of the Sahara, past the Cape Verde Islands and eastward to the Leeward Islands. The storms that become hurricanes before reaching the Caribbean pack the fiercest punch, fully formed with an eye and covering hundreds of miles of the planet’s ocean.

Although the tropics loom in the back of our minds early in the summer, it is August through September that concern us most. Summer heat peaks on land, and sea water temperatures rise to provide the “fuel” for tropical storms. There is little we can do aside from being prepared for loss of power: solar lights, camp stoves, a generator for the refrigerator and a small airconditioning unit to ease the tropical humidity hauled north by the storm. If the storm arrives as a Category 3 or worse, we would likely evacuate, a false sense of safety as storms that intense spread across a massive swath of real estate, so the “safe zone” can easily be an area too far to reach in a practical amount of time. Hurricane Florence, a few years back, was such a storm. Safety was projected to be west of Greensboro, i.e., the mountains, the opposite end of the state, a six hour drive under favorable conditions and normal traffic. However, if we fled west, the flooding delivered by the storm would likely prevent us from returning to our home for two weeks or more as area highways would be inundated by local rivers swelling beyond their banks with the ultimate rise and fall of storm waters continuing well past the departure of the storm itself. Trees blown down by high winds and/or tornadoes would block roads that might not be flooded. Our conundrum: stay in our home and experience the storm directly with no option to depart once the storm arrives, or plan on paying for more than a week of food and lodging somewhere near the mountains without knowing when we might be able to return.

Hurricanes are complicated. I do not mean in the sense of how they function as weather, although they can be difficult to track and future paths challenging to predict. They are complicated in terms of the problems they present for those who live in the target region. Flooding, loss of power, loss of communication, flying debris, falling trees (especially the tall pines prevalent in the coastal plain). Services that customarily provide health and safety, such as police and ambulance services, may be unable to reach those who need them and also unable to reach the hospitals where serious treatment is available. The complication comes down to this: whatever decisions you make before the storm is upon you, you live with. The birds and squirrels have long since fled. There is an eerie quiet that accompanies the approaching storm, a gloomy stillness that drops over the world. As a practical matter, you cannnot change your mind and leave once the winds and torrential rains begin to limit visibility and impair safe travel. You spend days waiting and watching the progresss of the hurricane only to be stuck in your home waiting and watching the storm as it rages around you, mostly the sound of rain bands pulsing past and the noise of trees whipping to and fro interrupted occasionally by the explosion of a transformer.

A day before the eye makes landfall, the outer bands of the storm begin to arrive like family early for dinner, expected but not on time. Skies dim as clouds skim across the blue, thicken, and scattered showers test the air in bursts forecasting the torrents that follow. Winds mostly remain light, their power absorbed into the inner circles of the storm’s vortex. If we are in the path of the hurricane, we pay closer and closer attention to the speed, direction and predicted path of the eye. We seek telltale conditions such as wind direction. If we are west of the eye, northerly winds will lead the hurricane. If we are east of the eye, southerly winds will arrive hot, aggressive and carrying the highest gusts, the heaviest rains. East of the eye lies the most severe damage zone, the red and purple on the radar, the spawning ground for tornadoes.

By the time the eye crosses onto the land, darkness has descended, dusk in the day, impenetrable black if the night. We are enclosed in a disorienting bubble of limited information, limited view, surrrounded by the droning of wind and rain. We listen for broken limbs cracking through the night and the beeping alarm of weather alerts. No matter how many flashlights you light, the inside of the house is dim. This might be cozy on a winter night with snow softly drifting, but the scene feels more like a horror film when the sparse lighting and quiet suggests impending doom, the approach of a zombie or the disappearance of a guest who just stepped into the kitchen for a cup of tea. We read by headlamps, one part of the brain following the words while the other listens for any break in the sounds of the storm, a falling branch, dropping pine cones, surprisingly strong gusts of wind, the roar of a train that might indicate a tornado.

Time slows, each second a full and casual breath. Exhausted from the preparations and the anxiety of studying the approach of the hurricane, sleep should come easily. It does not. Part of each of us knows that we need to remain alert, hear the crash of damage before it harms any of us, hear the shattering in time to throw a tarp over a broken window or door to minimize the rain that blows into the house. And the clock barely marks seconds as minutes, minutes as hours. Only when the storm has departed and the winds subsided, the sun rises in a clearing sky, do we begin to see how the weather has ravaged our world, what has survived and what has not. 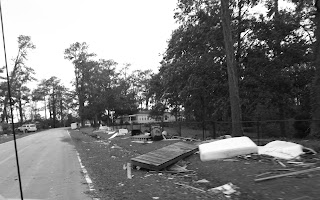 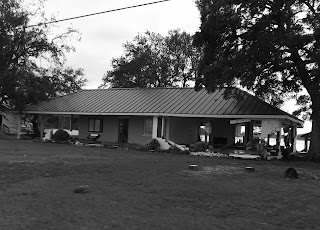 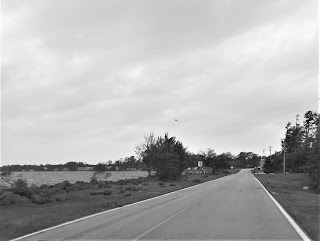 Rocks from the Seawall 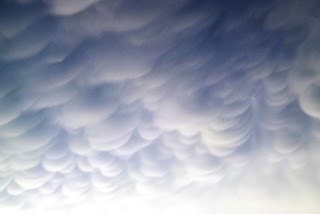 The Sky of the Passing Storm