Can’t Live in our River

A marvellous amphibian that you may never see is the largest salamander in North America, an ugly baguette of slimy mottled flesh know as a “hellbender”, “devil-dog”, “mud-devil”, or even “lasagna lizard” (who thinks of this stuff?). Cryptobranchus alleganiensis. Even the latin designation captures the “cryptid” aspect of this strange animal. Growing up to 29 inches long, it hides under large rocks in the fast clean waters of the mountains, the same waters where trout thrive. When water quality declines and sedimentation fills the gaps in the river rocks, these mysterious animals die. Thus, the current population is sliding toward extinction from Georgia to Pennsylvania. 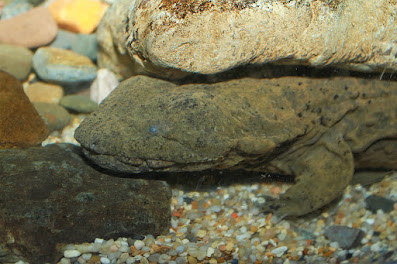 Its appearance alone, broad flat head with beady eyes, wide mouth and soft pebbly skin, is creepy, the stuff of horror films and nightmares. Only its feet are cute, reminiscent of a river otter’s paws. Combine its looks with its name and you have a decent recipe for a demon to be avoided. Apparently, out of concern that the creature is threatened in part due to the satanic rumors associated with its existence, wildlife biologists decided to improve its image by rebranding it a “snot otter”. Personally, I find the logic pretty weak. “Mudpuppy,” maybe, with its cuddly connotations. But is “snot otter” an improvement? In Pennsylvania, where the hellbender has become the state amphibian, apparently it is.

I prefer the hellbender name. It says, “don’t mess with me”, something the harmless (to humans) amphibian needs to survive the cruel curses and degradation of its habitat. Those who might harm it need to have second thoughts about the karma of tormenting a massive otherwordly tadpole.

Salamanders of a certain size, say up to a few inches, can be cute when you find them under small rocks along the edge of a creek. A few years ago, my son and a friend of ours were camping in a state park where a rare salamander lived, the Carolina mudpuppy or Neuse River Waterdog. Its range is limited to the watersheds of the Tar and Neuse Rivers. It was found in this particular state park near the Virginia border because Fishing Creek (one of several across the state) provides some of the cleanest wild water in the state. We decided we wanted very much to see one in the wild, a true totem of the area. Fascinating little dragons (a flare of skin behind where ears would normally be) only a few inches long, who would not want to hold a puppy or waterdog? We flipped rocks in a tiny tributary and paddled a small, sand-bottomed creek but never found the salamander. In fact, Sasquatch sightings in the same park may be more frequent.

When I first learned about the hellbender, it chilled my enthusiasm for flyfishing the high mountain streams of the Great Smoky Mountains as well as any dreams of a cooling midsummer dip in one of the many deep pools that form below waterfalls pouring over big boulders in the same steep mountain streams. I could too easily imagine relaxing in a dark, shady pool, the heat of summer drifting downstream with the current when suddenly a slippery log rubs past my legs leaving a trail of snot-slick slime. It would be, in the moment, the sight of a cryptid scarier than Sasquatch, a water beast that might attack from below, chomping naked toes before I could thrash my puckered butt out of the creek and across the rocks back onto the safety of the bank. Fortunately, they do not bite.

Despite my curiosity, I remain ambivalent about sighting a hellbender. I am content with the surprise of the occasional snake. And the Chinese can keep their giant salamander that grows to six feet. I intend to keep my distance from any creature as large as me.