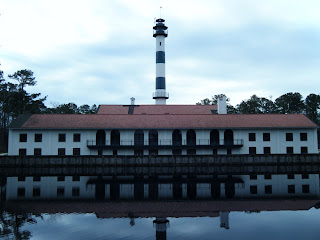 Father and I left the wedding reception at the country club early. Even so, the roads were lightless except for occasional security lights on remote farms we passed along winding, empty country backroads that by-passed all towns between Kinston and Lake Mattamuskeet. With nothing to see from the car for two hours, we could have been anywhere on the planet. I had never been to that part of eastern North Carolina, so I would have been lost in daytime. At night, as a teenager, it was more like being in a horror film when the characters are lost and hesitant to stop anywhere to ask for directions, expecting antipathy, if not hostility, from locals who might prefer outsiders remain disoriented and unlocated.

When finally we pulled into a small parking lot beside a large white building with broad steps leading up to a double door, it was nearly midnight, and no one greeted us. Only the deep impenetrable dark of night surrounded us. We could not even see the lake. A single bulb lit the stairs. Father pushed the door open, and we entered with all our gear: luggage, waders, shotguns and ammunition. We had arrived for my first goose hunt. Opposite the door against the far wall stretched a worn wooden counter empty except for a guest register and a key on top of a card with our last name, room number, and a scrawled note stating that breakfast would be served in the dining room at 5 AM.

Was anyone else around? Where was the dining room? Who wrote the note, and where were they? Would someone wake us in the morning? How would we find our guide? I felt as confused and trepidatious as Jonathan Harker arriving at the Count’s remote Transylvania castle.

We could see a hallway to the left of the counter that we guessed might lead to the rooms, so we walked that direction and down darkened, creaking wooden floors until we found number 4 on a door to our right. Turning the old loose door knob, we pushed the door aside. The room was sparsely furnished with two twin beds, each covered with a thin blanket. A simple straight back wooden chair and a table stood under the one window. The window rose to the ceiling, but nothing was visible outside. Still, I could picture someone watching as I stood there preparing to close the curtains. There was no telephone, no way to call for help, set a wakeup call, or order room service. A small bathroom with faded pale green tile opened off to the left at the back of the room. The towels had been worn threadbare. We both dropped our gear and undressed for bed.

Before I knew I had slept, there was a hard knock at the door. Our room remained unlit. It was still night. But it was 4:30 AM, time to wake. We dressed heavily in layers for a winter morning in a shooting blind on a cold, windy lake, then walked back down the hall the way we came when we arrived, hoping someone would be at the front desk to direct us to breakfast. As we walked, we looked around for signs of a dining room and saw only the absence of notable features from the night before, dull walls and shadowy corners.

No one waited at the front desk, but a shard of light sliced the hall farther along. Inside we found rows of large tables, two of which had pitchers of juice, flatware and white stoneware coffee mugs. It could have been a prison dining hall for all the warmth and lack of welcoming atmosphere. Not at all my idea of a hunting lodge unless conjured by the brothers Grimm. We sat at the first table and each asked the other if he had slept well. Naturally, we had. Reaching our destination so late and finding it to be more eerie inn than cozy hunting lodge with a bright fire burning in the stone hearth, then sleeping less than five hours, our sleep had been deep if briefer than usual.

Noise. A man pushed through a swinging door from the kitchen to ask if we wanted cereal or a hot breakfast. The aromas of sausage and coffee swirled in his wake.

“Hot,” we both replied. We poured ourselves glasses of tepid orange juice to sip while we waited.

Another table was set for guests, but no one showed. Why? My imagination returned to possible consequences in a lonely lodge in the middle of nowhere. Who would miss them? Father and I traded senseless banter until the cook emerged from the kitchen with fried eggs, sausage, grits, biscuits, and coffee. Ravenous after eating only hors d’oeuvres at the wedding reception the previous evening, we devoured the breakfast.

As we drained the last of our coffee, a man in camouflage hunting attire strolled into the room and asked if my father was Dr. P. (Few people could pronounce our name correctly, and we were accustomed to it, taking no offense.)

“Name’s Carl. I’ll be your guide today. You have a swan permit?”

“That’s fine. For those who do, we usually just knock that off first thing. Those birds are so big, they are hard to miss. Kind of like shooting a B-52 bomber gliding in slow for a landing, so we shoot one of them first and then hunt for geese. Anyway, take your time. I’ll be waiting up front.”

Last slurps of coffee, then we hurried to the restroom (not knowing when we might be near one again), grabbed our guns, filled our coat pockets with ammo and headed up front to connect with our guide. He would drive us to the boat ramp and ferry us to the blind in his boat through an icy fog. We would be sitting in the blind with the decoys arrayed across the water before sunrise. As we sat shivering in the pre-dawn dark and brisk northerly winter wind, we strained to see anything moving in the sky. In a low voice, Carl told us what to expect, which birds to target, and he insisted we wait for his okay before we shoot, so we would not shoot too early or try to kill birds too high (“skybusting”) and, especially, not to shoot out-of-season birds that also wintered over on Mattamuskeet. In the dim light of dawn, anything with wings might appear to be a goose to novices like us. With an impaired depth of field in the low light, even a sparrow or any of the generic tweety birds might appear fair game. Weary but excited, we sat on a hard board bench a few feet above the lake and waited for the sun to creep over the horizon.

We heard geese and swans honking and calling back and forth among their flocks before we could see them coming off surrounding fields to land on the lake, honking as if powered by their own sound. “V” formations of geese littered the sky at the limits of our vision while we gazed along the surface of the lake between our blind and the shoreline searching for the peppered clusters of birds intending to land. As the sky turned gray with the light of the rising sun, we could see a few flocks in the distance. Our eyes began to adjust to the dim light, fingers tested the safeties on our shotguns, and we double-checked that chambers were loaded. We tracked birds that were too far away to shoot, testing our sight and reflexes.

Flights landed in front of us, left and right, all too far away to shoot. Carl nudged my leg and nodded toward a small group of three that banked and dived toward our decoys, beginning to lock their wings in long arcs as they slowed, dropping in low and close. I stood, selected my target, led the bird slightly as it approached us, then pulled the trigger. The sharp and sudden explosion of the shotgun quickly vanished into the mist over the lake as the Canada goose crumpled into the water near the blind. My first goose. And the only one killed that day by me or Father. No other flights came close enough to shoot.

I had shot doves, and I found myself wishing there had been a fanfare or skyrockets exploding overhead to commemorate my first goose. Then again, it was just a bird, a beautiful wild bird with a black head and a body of light gray, dark gray and white feathers that had flown thousands of miles trying to reach a warm place to spend the winter. A dead bird. My father wanted to have it mounted. My first goose. We should have eaten it. There was no trophy, only wild meat. 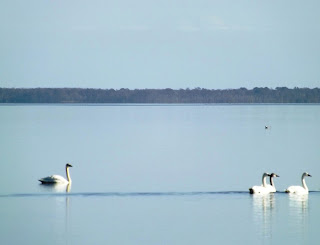 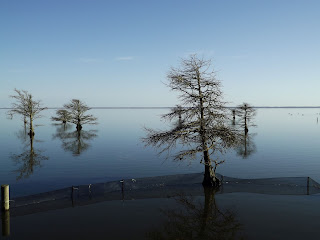 Juniper on Lake Mattamuskeet near Shore