Bill Boone’s Bungalow in the Boonies

The fishing cabin was a spare and simple shack perched atop a wooded bluff on the west side of the White Oak River a few miles upstream from Swansboro. Two small bedrooms, a modest galley kitchen, a screened porch and a steep overgrown path down to a dock on the river. The ceilings were low, the military gray paint old enough to reveal raw lumber beneath.

Wild Bill worked on Bear Island, aka Hammocks Beach State Park, just south of Swansboro on the ocean and bordering Camp Lejeune Marine Base. Bear Island was bare of amenities except for a small bathhouse with restrooms and a bit of shade. Otherwise, the island was all sand and sea oats with a maritime forest snug against the north shore nearest the marsh that stretched between the island and the Intracoastal Waterway. 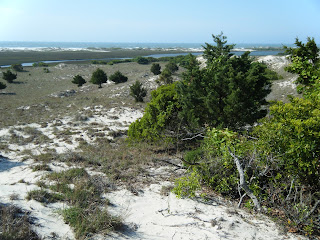 Bear Island with ocean in distance

Bill was a neighbor who lived cater-corner from the back of my parents’ house in my hometown. He had played defensive line on the high school football team, proudly carried a reputation for having a good time on the weekends, and graduated a couple years before me. After working a few summers on the island, he had worked his way up to a permanent position and rented the fishing shack from Roger Badrock, another hometown friend I had known from Boy Scouts.

It was early in summer just after I graduated from high school, and I wanted to live at the beach, surf, crew on a sportfishing boat, and generally live the life of a beach bum. Bill agreed to let me stay at his shack while I looked for a job. He knew I had no money so he did not propose any rent, but he said we would share kitchen duties; he would cook, and I would clean. He regretted that arrangement when, in a surge of enthusiasm to demonstrate my value and work ethic, I swept the shack clean and scrubbed his well-seasoned coffee percolator with soap.

After he made a pot of coffee the next morning, he woke me from a comfortable slumber bellowing, “What the hell did you do to my coffee maker?” I thought he was going to hang my scrawny ass by my toenails.

I had borrowed my father’s station wagon so that I could drive up and down the coast looking for jobs from Swansboro to Beaufort, and I could get to the beach if the surf was up. My father kept tabs on my progress (or lack thereof) toward finding employment. He mentioned that he knew Tony who was one of three owners of Tony’s Sanitary Fish Market, a landmark seafood restaurant built over the water on Sugarloaf Channel in Morehead City where for decades it was tradition for patrons to toss their leftover hushpuppies to feeding fish and seagulls. On either side of the restaurant, charter boats docked. I suggested that my father might ask Tony if he knew any of the captains (of course he did; he bought fish from them) that he might introduce me to. Tony told my father he was happy to help and said I should stop by in a few days.

Feeling confident and cocky that I would land a position as boat crew with the promise of long days at sea catching big gamefish, decent pay and even better tips, I visited Tony’s office at the restaurant. “Come with me,” he gestured toward the hallway. We meandered into the back of the restaurant where the seafood was loaded, cleaned and refrigerated. Tony introduced me to Bob, his crew chief. “Bob will take care of you. Nice to meet you. Tell your father I said hello.”

“I am sure he sends his thanks.”

Bob walked me through the rear entry of the kitchen and gave me a tour of the fry line before showing me the window where the dirty dishes were returned by the bus staff. My ego plummeted. Clearly I was not about to meet a charter captain or step onto a charter boat. Bob was telling me my responsibilities as a dishwasher, my pay (minimum wage and no tip share) and my work hours (Monday through Saturday, 55 hours per week). All I could think was “Oh shit.” But I lacked the assertiveness to decline the position. My father had asked a favor of a friend, the message must have gotten confused, and now I had a job that left me no time for fun, no time to surf or hang out on the beach, much less cruising the Gulf Stream in a charter boat hunting for tuna and marlin, dorado and king mackerel for good money.

For a couple of weeks, I drove a half hour from Bill’s shack to Morehead City to work long hours shoulder deep in used, soggy, slippery cole slaw. Now that I had a job, my father asked when I was returning his car. Ah, a small but sweet revenge. “I don’t know how I can return your car and keep the job. It’s thirty minutes each way, and I don’t make enough money to rent a place, nor do I have time to look for somewhere to rent.” My explanation did not satisfy my father. He wanted his car back, which I understood. But I wanted a job crewing a charter boat. A karmic balance of inconvenience meant neither of us had what we wanted. I said nothing but hoped that he would permit me to quit the dishwashing job so he could have his car.

The Saturday following this conversation, I was dutifully performing the disgusting task of spraying dirty dishes, rinsing the smear of slaw, ketchup, cocktail and tartar sauce along with fish bones and pre-chewed food into the oversized stainless steel sink when Bob stuck his head in the kitchen and said my father was in the hallway to speak with me. I washed the grease off my arms as best I could, but they remained coated with a slimy film as always during work hours. Then I stepped into the hallway, acted pleased to see my father and knew that nothing good was headed my way.

“How will I get back to Bill’s place?”

“You won’t. I stopped by there and collected your clothes, surfboard and stuff. Here’s a key for a room at the Jefferson Hotel. I paid for the first week. You can walk from there to work easily. It’s only a block.”

I never saw that coming in any form, but I had to return to work and pretend nothing bad had happened. I could not let my co-workers see that tears were pooling in my eyes, fear clamping my chest. More alone than I had been that morning, I choked my emotions in the back of my throat, finished my shift and walked over to the old hotel without knowing what I would find there. The Jefferson was the oldest hotel in Morehead City, a high rise set back from the water and adjacent to the industrial port that might easily have hosted Thomas Jefferson or George Washington and never since been painted or the grounds maintained. If a small town like Morehead City had a flop house, the Jefferson was it. The Jefferson was in no way a beach resort of the classic sort, just a beat up cheap hotel.

Tramping along the creaky wooden floors and stairs, I found my room. It was just barely wide enough for the sagging twin bed and a chair. A small window above the bed opened toward the water beside a tiny bathroom adorned with water stains. There was no air conditioning. And I quickly discovered that “cheap” is a relative term. The rent for this walk-in closet of a room cost half my weekly take-home pay. After buying food (the restaurant did not permit staff to eat for free even though the cooks I befriended would usually toss me a deviled crab, fried shrimp, oysters and fries with a swift flick of the wrist, and airborne bites came over the cook line into my waiting hands), I had a financial surplus each week sufficient to purchase a pack of cigarettes and an eight pack of Rolling Rock “ponies” from the marina across the highway or a book. I tended to alternate weeks between beer and book.

Most troubling of all was the fact that I had no way to get to the beach with my surfboard other than hitchhiking. I did not mind hitching, but trying to catch a ride with a seven foot surfboard under your arm and a pack on your back was not ideal. Young people tended to have cars too small to carry me and the surfboard. Parents with bigger cars did not want to pick up some long-haired hooligan hitchhiking. In addition, I could only surf on Sundays, my sole day off. Despite the hurdles to reaching the beach to surf on Sunday (less traffic and most cars headed home after their vacation at the shore), one day I hit the jackpot. Rides came easily, and the waves were pumping big round deep green ground swells. I paddled and caught waves and rode to the beach and paddled back out to catch another wave for hours. A street urchin tried to steal my pack from where I left it against the seawall while I was riding waves, not anticipating that I could see him, and the waves carried me swiftly to shore to cut him off. By late afternoon, my arms drooped like noodles at my sides. At long last, a great day surfing.

A month later, broke and disgusted with my semi-permanent sleeve of slimy cole slaw, I quit. As far as I was concerned, I had honored my father by accepting a lousy job offered by a friend of his as a favor to him. I had worked hard for little pay, failed to achieve any of my summer job objectives and decided I should move on to whatever I might find next. I hitchhiked back to Bill’s shack and found a way to crawl in over a screen porch wall, so that I was sitting in a chair on the screen porch drinking one of Bill’s beers when he got home from work.

“Where the hell have you been?” His angry indignation surprised me.

“Didn’t my father tell you?”

“When he stopped by here to get my clothes, surfboard and stuff, didn’t he tell you he was moving me to the Jefferson Hotel so he could take his car back?”

“I never saw or spoke to your father. I thought you just up and left.”

“Damn. You know I wouldn’t have done that.”

“I didn’t think so, but you were gone and so was all your stuff.”

“Sorry about that. Can I stay for a few days? I have no way to get home.”

“Of course. By the way, two nights from now is the full moon, and we will be on the island to watch the loggerheads hatch. If you’re still around.”

NOTE: Bill earned his captain’s license and, after captaining a variety of yachts and fishing boats, became the captain of the Forbes Highlander, a 151 foot Feadship, commissioned by Malcolm Forbes and, at the time, one of the most renowned private yachts in the world. Bill served as captain more than a decade until the Forbes family sold the yacht.