Sunday. Father’s Day. I intended to sleep in.

Just before 7:00, I heard my phone ring. Usually I ignore it due to the number of scam calls, but Beth answered so I knew it must be someone I know. It was Henry who owns the marina where we kept Wild Haggis. We had moved into a rental house when we both started working so that we could bypass the energizing dawn trek from our outer dock to the showers in the club house, so I mainly checked the boat before, during and after storms. Why would Henry call, especially on a Sunday?

I hurriedly pulled on shorts, shirt and sandals (not the customary morning ritual of shit, shower and shave), called Cameron to wake up and come with me just in case there was something we could do to begin to remedy the problem, not that I thought there would be.

From the club house, it was not entirely obvious that the boat had sunk except that there was little deck visible below the mast. Of course, at 63 feet above waterline, the mast was conspicuous anyway, just tilted as if broken. Despite there being no reason to hurry, our pace out the dock was swift. Henry stood on the T head beside the boat keeping watch like a diligent guardian. As owner of the marina, he clearly felt badly about the sinking even though he had no responsibility. As a friend, he empathized with our shock.

Just as he had described on the phone, the decks were awash with only the tip of the bow remaining above water and keeping the two anchors dry, two items I could care less about drenching. A northerly wind was blowing hard enough to push waves against the seawall at our stern which in turn ricocheted into the cockpit and down into the saloon. Floorboards and miscellaneous junk swirled around the cabin.

Me, “You’re looking at it.” It is not unusual for cruisers to forgo insurance. Our boat insurance had been five times more than our house insurance.

“Good, then we do not need to wait until the insurance company can get a salvage crew here. I think we can float it with a couple of trash pumps. I have one, and I’ll call Bobby to see if he can bring his.” Bobby was a man of many marine talents who built and repaired docks and seawalls, salvaged the occasional boat and generally made himself useful. More than competent, friendly and generous, it seemed only minutes before he was on site.

Bobby, Henry and I huddled on the dock as the sad hull rocked at the surface of the water sucking swells into the saloon and surging water back out. Our first issue was Why did she sink? Was there a gaping hole in the hull that would flood the bilge no matter how many pumps we put to work? If there was a hole in the hull, how would we find it? The sole of the boat has several hatches, but they do not offer complete visual or physical access to the inner hull. Water could pour in from any number of spaces under berths, water or fuel tanks, the engine etc. This was not an issue we could resolve by observation. On the other hand, the keel was clearily resting in the mud bottom of the creek, the water level was high due to the north winds pushing Pamlico Sound up the Neuse River, and no amount of pumping would allow us to remove more water than could continue to flow into the companionway.

“I think the north winds are supposed to die down tonight and switch back to the southwest by tomorrow morning.” It was good that Henry had already listened to the weather .

“Well, I don’t see any material harm beyond the existing damage from letting her sit overnight,” I wanted to vomit the words, but I believed them. What was wet below could not get any wetter. Whatever had been ruined by the water could not get any more ruined. Heartsick and helpless to reverse time or consequences, I stared at Wild Haggis, lost in my own despair and once again feeling a victim of fate. Aside from having remained living on the boat, which was impractical with Beth and me having to work every day, there was no way to anticipate or prevent the sinking.

We agreed to meet on the dock at 9:00 AM. Henry and Bobby would bring their trash pumps. Bobby would bring a couple of his crew. Cameron, always game and helpful, hopped aboard to secure some gear loose on deck. We had lost two water jugs and an aluminum propane tank, all three of which had floated off to where, never to be seen again. Maybe a young lad or lass in Ireland or Scotland would find them on the beach encrusted with barnacles and a gallimaufry of thriving marine life that would attach during the long float along the Gulf Stream. Or maybe a great white would take a bite of the plastic water jug.

Back at our house, my father’s day was grim for all of us. We knew Wild Haggis had sunk. We did not know why. We did not know how much we might recover, how much might be forever lost. Crying over spilt milk, or water under the bridge, is completely futile, but our emotions want to release the despair. The only “what if” that made any sense was that we would have noticed the rising water if we had still lived on the boat. But we did not. So there we were, a boat soaked to the bone. More would be revealed the next day when we attempted to pump her dry and re-float.

We were renting a house, so our home had not been destroyed. We had a place to live. Nevertheless, our permanent home had suffered the next worst catastrophe after a fire. We retained a roof and walls, but what else that we needed? All electrical connections were soaked and inoperable. 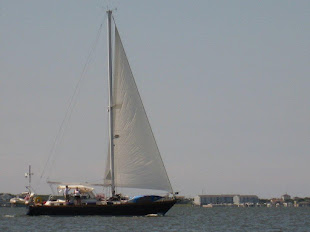 Everyone was on dock on time, and Bobby’s crew had started lashing the trash pumps to the dock pilings. He and Henry had seen too many pumps roar to life and then vibrate themselves across the dock into the water.

“Stand back. You’re about to watch 600 gallons per minute launched across the dock.”

With a great roar and growl, the pumps rumbled to life like voracious dinosaurs, and the water blasted horizontal from the hoses. Impressive as the action looked, none of us knew whether the pumps would reduce the water level inside the boat. The wind had switched as forecast, so the deck was a good foot or more above the water surface, but we had no knowledge about the source of the flooding or how fast the bilge might replenish whatever water was pumped out. Everyone glared at the cabin as if our attention would cause the water level to drop.

Surprisingly, after only ten minutes, it was clear that the water level had declined. Wild Haggis was not yet floating, but there was less water inside than there had been when we started. Faces began to smile, but we still had to determine the source of the water and block the leak. In the meantime, we made arrangements to get hauled out at Deaton’s Boat Yard as soon as we floated her. Deaton’s was less than a half mile by water, so we hoped that we could keep her afloat with one trash pump as Towboat towed us up the creek.

With only a couple of feet inside the saloon, I stepped into the river water that still sloshed around. We had imagined a scenario that might explain the source of the water, so I leaned under the galley sink to check it out. Sure enough, I could feel water pushing out of the sink drain where it had detached from the sink under the cabinet. We cut an emergency plug and stuffed it into the drain pipe. The water stopped. It would be a while longer before we confirmed that the drain was the only source.

All drain hoses in the boat exit directly into the surrounding sea, creek, river, ocean or wherever we were floating. The drain from the galley sink was usually dry except when the wind blew from the north with enough force to lean the boat to starboard and push the bottom of the sink below the waterline. In that case, the creek water, with salinity as high as the ocean, rose into the sink. The sink was stainless, so a little creek water seeping into the sink never concerned me. It should have. Over the years, the occasional seepage rusted the connection between the drain and the drain pipe. During the most recent northeaster, the rust finally lost the connection and left the drain pipe below waterline and terminating below the sink, hidden inside the cabinet, a 1.5 inch pipe directly into the water below the hull. As the hull rocked from vertical to starboard, each cant invited a surge of creek water. It probably took several hours for the drain pipe to be fully immersed below waterline, but at that point there was nothing to prevent more flooding.

Yes, we had a few bilge pumps, but I suspect that, once the outflow hose for the pumps dropped below the surface of the creek, the pumps probably lacked the force to push the water against pressure of the creek or the pumps slowed to the point that they could not keep up with the water flowing in. Whatever the details, Wild Haggis sank.

The trash pumps blasted a boisterous commotion, shooting jets of expelled floodwater over the creek. Surprisingly, Wild Haggis floated in less than half an hour. At that point, a quiet contentment returned, but I quickly realized that pumping her out had been the easy part.