In the Field: Memories of a Small Town Boy

I spent half my youngest years in Kinston in eastern North Carolina. Farms filled the surrounding land. Two Civil War battles were fought at nearby Southwest Creek and Wyse Fork. (The South lost both.) A modern memorial downtown is dedicated to the CSS Neuse, an iron-clad Confederate navy ram constructed upstream near Seven Springs on the Neuse River, more than 60 miles of shallows and snags from the open waters at New Bern where the ship was intended to patrol, and scuttled to avoid capture before it could battle with the Union Army.

As the county seat, Kinston was the heart of the county, the destination market of the central coastal plains region, with merchants along the Magic Mile (think Kerouac’s chicken shacks on Queen Street) serving Lenoir County and beyond in the days before suburban malls eviscerated downtown commerce. Pearson’s Department Store, Stadium’s Men’s Store, Dupree’s Children’s Store, Oliver’s. Banks, furniture stores, pharmacies, the Courthouse, County Library, Parrott’s Feed and Seed, Lovick’s Diner with its world famous Dough Burger and dual entries, and Reynolds Seafood next door. Lester’s Hardware across from Jack Rider’s AM talk radio broadcasting on Herritage [sic] Street, the town’s very own version of Rush Limbaugh before Rush graduated high school with his conservative and vituperous monologue.

A tiny green building on West Gordon Street, half block from the river across from Happersville (Kinston’s own Sin City with gambling, bootleg liquor, non-tax paid cigarettes, drugs, and prostitutes along with a shooting or two each weekend), housed a dozen surf boards as Bert’s Surf Shop long before Bert expanded and became famous along the coast. Bert’s was named one of America’s oldest surf shops by Stab, an online magazine, in 2016.

Corn, cotton, soybeans, alfalfa. Tobacco country. Tobacco warehouses (intown, downtown, edge of town) as befitted a major auction market and, later, warehouses converted into textile mills. Just outside of town Dupont continuously expanded its largest polyester plant, the biggest in the world before fashion returned to cotton and natural fibers. Dupont hired chemists, scientists, and all manner of workers with college degrees. Kinston was a quiet town with quiet people, a kind of ex-urban utopia for the fifties, sixties, and seventies with real neighborhoods and residents who knew each other.

For all its appeal to many citizens, the town was mostly unremarkable, peaceful and boring. Peaceful and boring except for hunting season when some of us tried to shoot fast-flying doves skipping wildly and erratically across the skies over corn fields. I was never very good at shooting, but I enjoyed it. I liked being in a dusty corn field at the end of the day, the sun casting a golden glow over the early autumn trees along the field margins. I embraced the quiet of listening and scanning for incoming birds until the field erupted in gunfire, shotguns popping all around, shot raining into the leaves from the shooters across the field. Boots and hunting jackets. Heavy khaki double-layered britches to protect our thighs and bottoms from the ubiquitous briars along hedgerows. Camouflage was reserved for deer hunting out of tree stands. 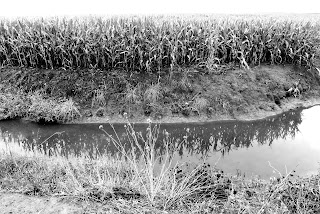 Most of all, it was great fun to carry a heavy shotgun. It was a lot of power for a young teenager. Carrying such weight also implied heavy responsibility, a responsibility not to kill or maim another person. To kill only the prey you sought -- doves during dove season, ducks during duck season. And not to kill anything other than what you aimed at and intended to kill. (No sniping at songbirds just because you were bored.) And to kill prey animals cleanly so they would not suffer. Included was the obligation to quickly dispatch any animal not cleanly shot. And, the easiest part, a responsibility to clean and eat what you killed.

When I returned home, I would be head-to-toe dirty, just-right tired and hungrier than usual. With any luck, I would have a game pocket full of birds and feathers with specks of blood sticking to the waterproofing. I would strip at the back door, peeling off hunting boots and sweaty socks, filthy britches and a smelly t-shirt, then do the same to the dusky gray feathers of the dead doves.

My first dove hunt was not auspicious. Along with my father and other sons and fathers, most of us Boy Scouts in the same troop, we took up our positions along the edge of the woods surrounding a corn field owned by a friend. We set up our folding chairs and stools and settled in to wait for the sun to sink lower and the birds to begin to feed for the evening. I did not have my own gun yet, so I was using my father’s Savage twelve gauge semiautomatic. It seemed as long as I was tall, a challenge for me to swing it up and follow for wing shots. In fact, I had never shot it before we settled in for the afternoon hunt.

As the first scattered birds began to swoop over the field, young hunters all around opened fire, a barrage aimed at impossibly small and blisteringly fast targets that were far out of range. I did not know that the birds were out of range; I only knew that the bird we had come to shoot was swinging vaguely in my direction, so I should pull the trigger and see what happened. The boys hoped against hope that the small targets would magically die mid-flight and tumble from the sky like we had seen our fathers kill. Shots firing all around the field. Doves diving, darting and dodging all the deadly shot we could spit their way. Doves landing in the field unharmed.

My father tried again to explain the theory of wing shooting, of leading the bird so that my birdshot would intersect with the bird’s flight, and the shot would connect and kill the bird. Another dove dropped over the treetops toward our part of the field. I stood, lifted the shotgun, swung to lead the bird’s flight path and pulled the trigger. Blam! On my ass. Shotgun on my lap. In the process of following the bird’s flight path, I had not repositioned my feet so that I was standing shoulder toward the bird, one foot in front of the other. Instead, I pivoted and found myself standing with my feet side by side, gun aiming directly forward. No brace or resistance to my stance, and the recoil knocked me backward onto the ground. Surprised and embarrassed, I was not hurt.

Nor was the dove.

Still, it was the first of many days hunting during my junior high school years and after college. Afternoons spent afield in different parts of our county and other counties. Big fields and small. Open fields and fields surrounded by woods. As much as we appreciated bagging some birds, the hunt was always more about being with friends and being outdoors. Hearing the crackle of squirrels frolicking in autumn leaves as they searched the ground for acorns. The breezes of changing seasons rattling through the treetops. The shriek of a hawk spiraling high above us.

Rarely did anyone have a dog to retrieve fallen birds when we were young, so it was the boys who dashed into the field to pick up dead birds like a ballboy scurries onto a tennis court to remove a played ball. But the fields were never flat like a tennis court. Whether muddy or dry, we hunched our shoulders and ran hobbled in hunting boots over the remnants of corn rows while trying not to stumble or trip on the stobs of cut corn stalks. Meanwhile, the hunting and the shooting continued. Even though you knew that no one was shooting at you because they were shooting at birds overhead, it was not completely comforting because you were where the dead birds and spent birdshot fell. Which should not be totally safe even though it was. I guess our fathers thought the risk minimal since they all sent their boys out. Maybe they thought it was safe enough just because we were smaller, faster targets than they would have been. [Later, I learned that among hunters, there is an allocation of morons just as with society as a whole, the kind of fools who fire their guns across the field despite dogs and kids retrieving downed birds. Never underestimate the power of idiots to make themselves oblivious to everything but themselves, especially in terms of accountability. Cf. politicians.]

At the end of the day with the sun sinking below an unseen horizon and draping a cool shadow over the fields, we shuffled back to the cars and trucks. There, everyone could begin the telling of the day’s tales, setting the benchmark for exaggerations that would follow. We unloaded guns, each asking others if they were sure they were empty, looking for open breeches and listening for loose shells rattling in pockets. The kill was counted by hunter and by group. Fathers with sons. Who had shot their limit? Who was close? Anyone who unintentionally shot more than their limit would share their excess birds with others who had not shot their limit. It was in my later years that some of the people with whom I hunted counted their kill in numbers of limits, how many times they had exceeded the legal maximum one hunter is allowed to kill in a day. I was never a very good shot, but I also did not see the point of killing more than was legal even though I eagerly ate my birds. 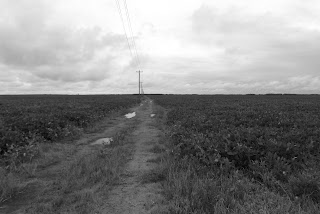