Tropical Storm Wanda is the kind of tropical (or subtropical) depression we enjoy following. She has been far out in the middle of the North Atlantic wobbling halfway between Newfoundland and the Azores and no threat to the US east coast. That may seem selfish since she may send some wicked weather to the Azores and the west coast of Europe with her sustained winds of 50 mph. Then again, maybe she will generate some unusually spectacular waves for the surfers in the British Isles and Ireland as well as the French Bay of Biscay. She probably needs to drop farther south to kick off Nazarre in Portugal.

What makes Wanda special is how long she has been meandering like a drunken sailor in the Atlantic with no apparent course to guide her. A week so far. The absence of a reasonably predictable course plays havoc with the ships that want to avoid her, but so far she has created conditions no worse than a moderately rough day at sea for the big ships. Still, I would do all I could to dodge her if I was sailing. Cruisers prefer avoidance to conflict when they have the option. No doubt that Wild Haggis, at roughly 40,000 lbs. displacement fully loaded, could handle the wind and waves with minor discomfort for the crew, but why expose yourself to the battle of preparing food (ingredients launched in all directions) while the cook braces in the confines of the galley and sleeping (the fall into troughs of big waves levitating you from the berth even with a lee cloth) in such weather if there is a more peaceful route?

The first lesson we learned as novice cruisers, courtesy of our slipmates Lynne and Steve, was to default to fun. Plan departures and routes for favorable weather. Why make your crew miserable and risk damaging your equipment when you can leave a few days later? You are cruising; what does time really mean? How important is your departure or arrival date? One way to express this rule is “Avoid schedules”. Upon reflection, this made perfect sense to us, but what did we do? Our inaugural cruise was timed to get us to Charleston for a nephew’s wedding. We promised ourselves that it would be the only time we would violate the rule.

Nevertheless, before we had even left for Charleston, our daughter came to visit from the mountains for her birthday. It was her first time on the boat, and we wanted to take her sailing. Saturday promised strong winds and rain, so we postponed our sail until Sunday, her last full day visiting. The forecast for Sunday was decent, but also included strong winds developing in the afternoon and four foot waves on the river by 2 PM. The captain (me) decided to sneak out during the predicted morning window. Cast off mid-morning and return for lunch. I knew better, and the weather gods reminded me. NOAA is usually 5 knots light on its wind forecast and only about 30% accurate overall. In addition, Murphy is aboard, so always give yourself a generous margin for error.

Immediately upon setting sail, the winds began increasing to the predicted afternoon high. Although that made for lively sailing, I had forgotten that our daughter had never been on a sailboat, so the hard port heel that thrilled me with eight knots of speed concerned her. Sitting on a bench in the cockpit, she felt that she could easily roll backwards off the boat and into the river. After all, the toe rails were under water and streaming white foam. “How do you know it will not turn over? What keeps the boat upright?” Fair questions that I should have explained before we set sail. 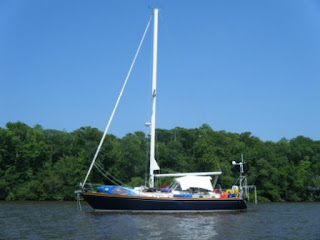 Anchoring in the Waccamaw heading south

We raced down the river a few miles, then raced up the river back toward Oriental. For me, it was pure delight to see Wild Haggis in her element with some fresh winds and modest waves as we sailed close-hauled with a full genoa and main. For the crew, the building winds and waves, well in advance of the forecast, tended to be a bit nerve-racking, so we decided collectively that we would return to the dock for lunch. I asked our son to crank the engine. Nothing. It failed to start.

Thinking the batteries were weak (though I could not rationalize why they would be less than fully charged as we had been connected to shore power at the dock), I climbed onto the stern railing and released the wind generator, frankly not knowing if it worked because the seller had represented it would (the marine surveyor should have tested it, but I learned much about what marine surveyors fail to do; as far as I know, he only verified that the blades would turn). In the wind that had by then exceeded the forecast and was blowing 15-20 with gusts in excess of 25 knots, we zipped up and down the river with the wind generator blades roaring round and, we hoped, creating power to recharge the batteries. At the same time, my entire crew was losing confidence and worrying how we would return to the dock without engine power. We dropped all sails.

I tried to assign duties, but no one, including me, was thinking clearly. I had to leave the helm in my wife’s hands, her first time handling the boat, so that I could go forward and drop the anchor, a plan that I expected would buy me time to triage the various potential issues and correct any simple problems. The anchor grabbed the bottom and swung the bow into the wind as four foot waves lifted and dropped the bow while tugging at the anchor chain. I emphasized to my family that we were safe, the boat securely anchored and going nowhere, and the shore was less than a mile away. We could almost walk back to the village. My comforting words fell lifeless into the whitecaps while the crew could not see any relief.

I continued to check instruments and the helm and jump below to try to start the engine, when suddenly the vibrating racket of the diesel shook to life. I dashed forward to haul the anchor, but the windlass could not overpower the force of the wind and waves, nor could my arms and back break the anchor free from the soft river bottom where it had dug itself deeper and deeper for the hour of pressure pushing the boat against the chain rode, so I was forced to cut the anchor line, losing an anchor and 100 feet of chain in the process. Swinging free, I steered the boat back into the harbor channel and back to our dock slip where plenty of friends waited to assist us. Ah, the relief of friendly faces. That would not have been an option had we been at sea.

The sailing escapade had been Gilligan’s infamous “three hour tour” and yet the adventure leaned toward the undesirable end of the spectrum. Imagine having a storm catch you in open sea (albeit a lee shore would be even worse) with serious winds and waves and no safe harbor nearby. Run before the wind with a sea anchor, heave to, or reef the sails. There are options but they are limited, and you do not know how long the boat will be stuck in the storm. And heaven forbid the boat suffers any gear failures. In the meantime, the crew needs to eat and hydrate, and not lose liquids involuntarily. (One couple had such a horrible time crossing the northern Gulf Stream on the way to Bermuda that they added suppositories to their first aid kit to stave off the future dehydration they expected to suffer from severe seasickness.)

In the clarity of the aftermath, I realized that I could easily have sailed into the anchorage just off the dock that we were renting. We could have anchored there and slept until the calm of morning light and/or assistance for starting our engine. But my focus had been returning to our slip.

And therein lies the difference between our nervous river sail and the threat of a wandering tropical storm, the course of which no one can predict. Matters of perception and perspective. What is truly dangerous and what simply makes us uncomfortable? None of us control the sea or the weather affecting it, but we can usually decide when to set forth and when to remain secure at anchor or dock until better conditions for sailing. Our cruising default setting should be comfort and security because there are no guarantees.